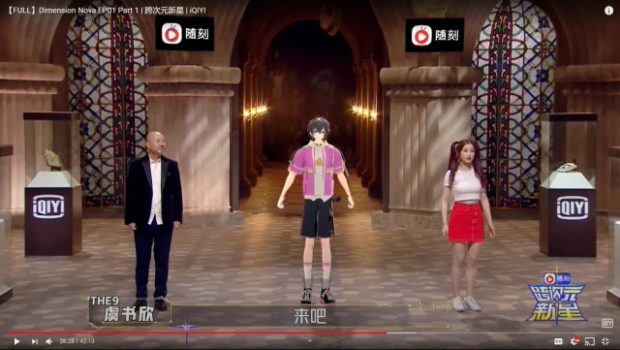 The first episode of “Dimension Nova” is available to watch (in two parts) on YouTube. Image: courtesy of iQiyi/YouTube

China is looking for its new idol, and a digital idol at that. At the end of October, the iQiyi online video platform — China’s answer to Netflix — launched a new show at the cutting edge of technology.

“Dimension Nova” is a next-generation TV talent show for virtual contestants only. It’s a completely original contest that’s gained much — ahem — attention on the internet.

After debuting in October 2020 on the Chinese online video platform iQiyi, “Dimension Nova” went relatively unnoticed by the rest of the world. And yet, the show’s premise is intriguing, to say the least. This new-gen TV talent show is a music contest that sees virtual contestants perform to a panel of human judges. The judges are three Chinese celebrities: Angelababy, an actress and well-known TV personality; Wang Linkai, a former member of the Chinese band, Nine Percent; and Esther Yu, a singer with the Chinese band, THE9. They are joined by Tengger, a Mongolian singer who steps into the role of presenter — or rather the “museum curator” of “Dimension Nova,” as billed by the show.

A total of 22 digital characters battle it out live to win a contract at the end of the contest. The contestants perform before the judges in a decor that could almost be mistaken for the legendary Hogwarts from the world of “Harry Potter.” The digital hopefuls are hidden behind picture frames on the walls. The show even goes as far as to take viewers behind the scenes, showing the creators of the digital characters and the control room during the live show.

While the show definitely has a sense of humor about itself, the quality of the virtual acts has left the internet a little perplexed. On YouTube, the first episode (posted in two parts) received no shortage of comments. Writing under the first part of episode one, user Yanhua Zhan resumes the quirky nature of the contest: “This is the weirdest variety show that I’ve seen this year” (“这是我今年看过最诡异的综艺节目了” in the original). The comment has been liked 575 times. Below that, another comment — this time written in English by “girl named brenda” — reads “Lowkey like how do they film this I’m so confused,” which has been liked 337 times.

While the concept of a virtual celebrity may have advantages for record companies, notably in terms of controlling the star’s image and money, technology does appear to have its limits. During the first episode, a digital contestant called Meiyu fell victim to a bug. The tech team then had to solve the problem live during the show. Plus, on the Chinese social network Douban, viewers lamented the poor quality of the performances, from both a technical and a musical point of view. Nevertheless, according to certain Chinese media outlets, a second season of “Dimension Nova” is already in the works. NVG