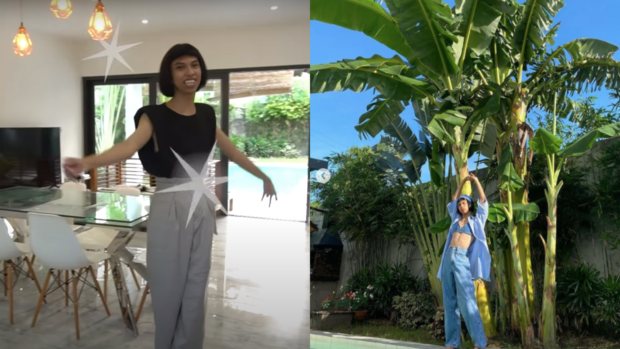 Mimiyuuuh showing the dining area (L) and a banana tree by the pool of his new home. Images: Screengrab from YouTube/mimiyuuuh, Instagram/@mimiyuuuh

Mimiyuuuh gave his fans a look at his and his family’s new home, which he describes as a “dream come true.”

The vlogger showed the different areas in the house in his latest post on his YouTube page last Monday, Oct. 26. He added that he immediately felt that it was the right one for them when he first checked it out.

(When I entered this house, I really felt at home because there are so many plants. It is not that big but once you feel the home vibe, that is really it. So we did not look for another [house]. My mother and father are very happy here.)

However, Mimiyuuuh noted that they have not finished moving in yet and that many of their belongings are simply just stored around the house for the time being. After showing off the garage, the vlogger entered their home and gave a glimpse of their dining area and kitchen.

The vlogger then revealed that his only problem with their new home is the Japanese-style toilets that can be controlled via buttons. He is not keen on the button controls because he is used to using a tabo (water dipper). However, he will replace the buttons with a bidet, which he finds more convenient and effective.

While inside his parents’ room, he walked out onto the terrace, which is one of his favorite spots. He added that on their second night there, he simply sat there to stargaze.

Mimiyuuuh also showed the grapevines his father is tending to. Before ending the tour, the vlogger made sure to show the master’s bedroom, which is where he sleeps.

It features a walk-in closet and his own bathroom. Though he now has a walk-in closet, the vlogger still keeps his popular pink plastic closet as well since many fans requested it. The said closet has been a common sight in the majority of Mimiyuuuh’s vlogs.

(When I wake up here in the room, the brightness is so intense that it can make you more energetic and ready to strive. You can see the view of everything you worked hard for.)

As he concluded the tour, Mimiyuuuh also took the time to thank all of his fans.

(I also want to say thanks to you because if you did not watch my videos, I would not have been able to buy this.)

The vlogger gained widespread popularity for his “Dalagang Pilipina” challenge, which went viral early last year. Following his rise to fame, Mimiyuuuh has since collaborated with various celebrities such as Heart Evangelista, Sarah Geronimo and Pia Wurtzbach. JB