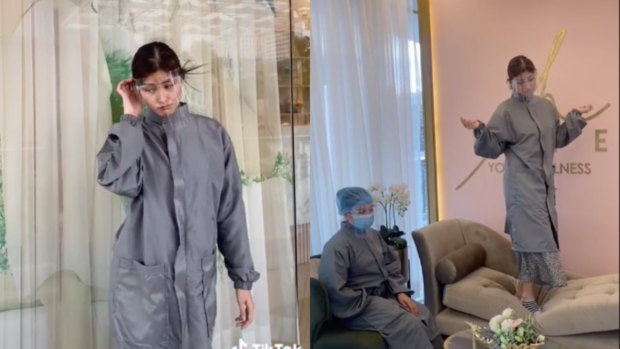 The actress posted her version of the dance on her TikTok page yesterday, Sept. 23. The short video shows her in one of her wellness center branches while she swayed her hips to “Kabet” by G*gong Rapper.

Soberano wore protective personal equipment and a face shield as she mimicked the vlogger’s moves and facial expressions. The actress also got her staff to join the fun as she danced close to them while they worked.

“THIZ PART IZZA VIBE,” the vlogger said with clapping emoji between each word.

Along with Soberano, YouTube star and beauty influencer Bretman Rock also took on the challenge earlier this month.

Though her short dance showed her quirky side, Soberano also knows when to put her foot down when it comes to serious matters—particularly rape threats. The actress recently received a rape threat from an employee of her previous internet service provider after complaining of her internet speed.

Following the threat, she has now vowed to go after the said employee. Soberano stressed that she “won’t let this one pass.”  /ra