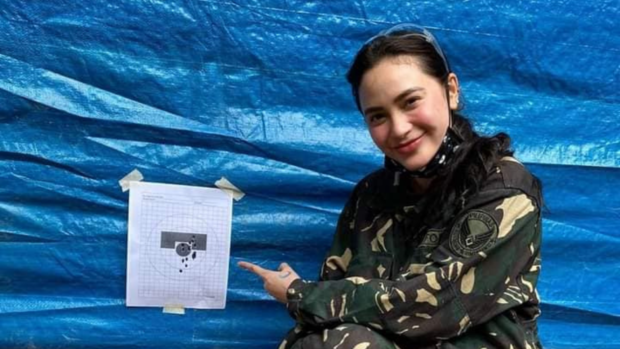 Arci Muñoz has officially earned the rank of sergeant under the Philippine Air Force Reserve (PAFR) Command after undergoing a 30-day training program.

The actress gained the title after completing the Basic Citizen Military Training course last Sunday, Oct. 25. The graduation ceremony took place in the Clark Airbase in Pampanga, as per the military unit’s post on Facebook on the same day.

Muñoz learned the basic knowledge and skills of soldiery under the supervision of the 1st Air Reserve Center for 30 days. The program consisted of marksmanship training, humanitarian and disaster response training, field training exercise, an obstacle course and “other activities that prepared her for her future roles as a Reservist of the Philippine Air Force.”

The unit also posted photos of Muñoz’s graduation and of her undergoing various training while wearing military fatigues.

Days after her graduation from the program, Muñoz spoke about her journey on her own page yesterday, Oct. 26.

“I made it! I just want to say I’m very proud of myself for finishing such a great feat,” she said. “Training with the military was really tough [especially] with a pandemic looming. I did things I didn’t know I would (and could).”

She then expressed her admiration for her colleagues while noting that the experience has humbled her. Despite learning some basic skills needed in the military, the actress hopes that she will never have to use her training for violence. Instead, she wishes to be an inspiration to many “to have a sense of comradeship so we can all live in peace.”

“I will forever cherish and hold on to the learnings and core values that this institution instilled,” Muñoz added. “I will remain a snappy composure and continue to serve in the best interests of my nation.”

Muñoz began training under the PAFR last June 12. Along with the actress, fellow celebrities such as Dingdong Dantes, Matteo Guidicelli and JM de Guzman have also joined the country’s reserve force. JB

WATCH: Arci Muñoz names plot of land after Jimin of BTS for his birthday