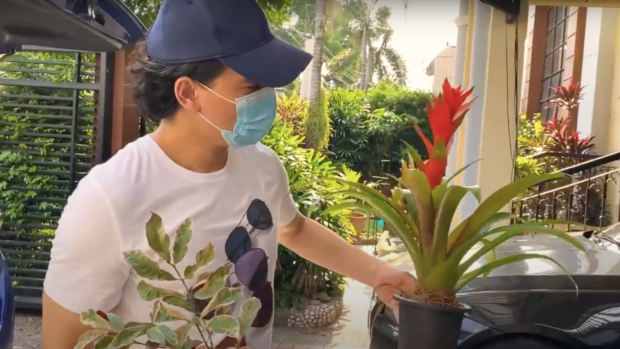 Erik Santos marked his venture into vlogging by channeling his inner “plantito” and recently showing off his new plants.

The singer also decided to give his garden a makeover since there are areas that looked bare, he said in his vlog post last Monday, Oct. 19.

Though he admits that he has no knowledge in gardening, he is still eager to become a “plantito” or gardener — even just for a day.

To kickstart the makeover, Santos asked his driver, whom he fondly calls Noy, to purchase some new plants. Among them were a fortune plant, a rubber tree and what appear to be bromeliads.

Santos then explained that prior to hiring Noy as their family driver, he was first a gardener and helped them landscape their other gardens. Given his experience, Noy taught Santos how to repot the new plants for the garden’s makeover.

Once they finished placing the plants in new pots, Santos took the time to water all of them. He used a dipper to pour water onto the medium and large plants and used a large syringe to tend to the smaller ones.

Santos then proceeded to cover bare areas of his garden with newly-bought frog grass. Though landscaping the garden hurt his back, he noted that it was also relaxing to place the patches of grass by hand.

After completing the makeover of his garden, Santos showed off the fruit of his labor. While he admitted that it was a tiring experience, he also said that it is definitely fulfilling to know he had a hand in revamping his garden.

Many Filipinos have turned to gardening amid the ongoing COVID-19 pandemic. However, the sudden rise of new plant aficionados has also been targeted by profiteers who jack up the prices of plants to as much as 3,000%.

Conservationists also sent off a warning about the poaching of wild plants, which some sellers label as “rare.” The Department of Environment and Natural Resources have cautioned “plantitos” and “plantitas” from collecting threatened or critically endangered plants that are protected under Republic Act (RA) 9147 or the Wildlife Resources Conservation and Protection Act. JB

Read Next
New gen music education strikes a chord on TikTok with #MusicSaves
EDITORS' PICK
Hidilyn Diaz wins weightlifting gold in Tokyo Olympics
Duterte: When I said I will fight drugs in 6 months, I thought it was like in Davao
Harnessing technology for quality education
Tips for a cheerful life
Connect to PH’s fastest network with new Signature Plan Lite at only P599 per month
Duterte warns of possible lockdown if ‘more aggressive’ Delta variant spreads
MOST READ
Hidilyn Diaz wins weightlifting gold in Tokyo Olympics
Hidilyn shoots not only for gold but also for permanent place in PH sports history
Go to war with China over West PH Sea? It will be a ‘massacre’, says Duterte
Duterte acclaims Sotto: ‘He can become a good vice president’
Follow @RArcadioINQ on Twitter
Don't miss out on the latest news and information.