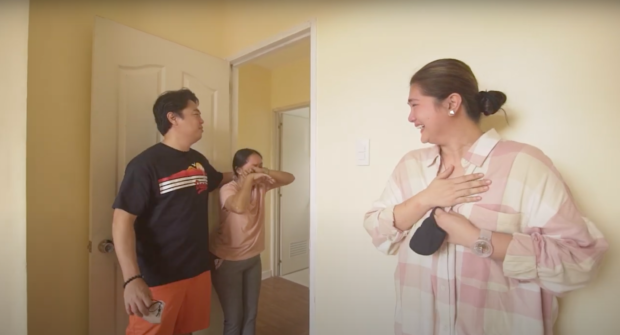 Dimples Romana and her husband, Boyet Ahmee, gave their housekeeper her own home to thank her for staying with them for 17 years.

The couple surprised their housekeeper, whom they fondly call Ate V, during a tour of the new property, as seen in a vlog on Romana’s YouTube page yesterday, Oct. 16.

However, they did not tell her that they had already bought the home they were visiting. They instead said that they were still planning on buying the house and needed her approval before pushing through with the purchase.

Romana and Ahmee explained that they always seek her opinion before buying a property because they trust Ate V’s decisions.

As they toured the home, which Ate V approved of, she often joked that it felt like it was built for her. The couple then went over to one of the bedrooms and asked Ate V to follow.

Once she entered, she saw that the wall was decorated with balloons that said “Oo para sayo ito (Yes this is for you)” and a standee of herself.

Romana then asked her if she liked the house as Ate V stayed in the doorway looking at the decorations. The housekeeper then broke into tears, asking, “Bakit ako (Why me)?”

Upon seeing Ate V’s reaction, Romana also began crying while the housekeeper continued to express her surprise and gratitude.

“Maraming maraming salamat po (Many many thanks)!” Ate V said.

Following the heartwarming surprise, Romana and Ahmee stated that they were grateful to be able to give back to Ate V.

Romana also revealed that there were times when they were still starting out as a family and they could not pay Ate V on time. There was even an instance when they paid her seven months late. However, she continued to stay with the family despite the delay in her salary.

“Hindi namin maabot ang mga pangarap namin, kung walang ‘Ate V’ kaming kaagapay sa araw araw na pamumuhay (We would not be able to reach our dreams if we did not have an “Ate V” by our side every day of our lives),” Romana said in the video’s description.

“Masaya ako na kahit papano, naibalik na namin sakanya ‘yung lahat ng pagmamahal na ibinigay niya sa amin all these years (I am happy that somehow, we were able to give back all of the love she showed us all these years),” Romana added.  /ra

Dimples Romana marks 17th anniversary with husband: ‘My heart will forever beat for you’