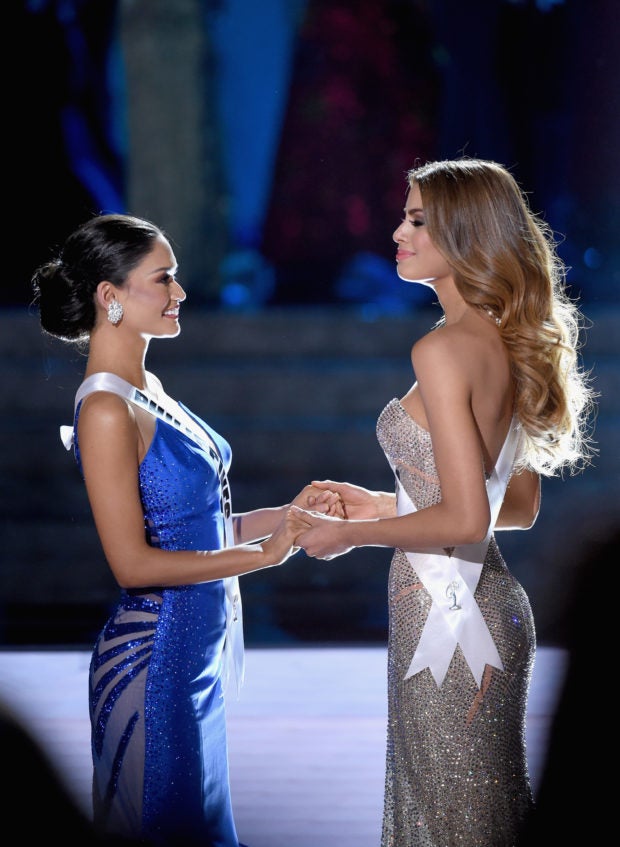 Ariadna Gutierrez revealed that she never thought Pia Wurtzbach would win the Miss Universe 2015 crown and likened her to a “ghost” she rarely saw during the pageant.

Gutierrez, who represented Colombia in the competition, was mistakenly pronounced as the winner by host Steve Harvey at the time. However, he corrected himself four minutes after and clarified that the rightful Miss Universe 2015 was Wurtzbach.

Almost five years after the awkward mishap between the two beauty queens, Gutierrez stated she did not think Wurtzbach was competent. She made the comment during an interview with Miss Colombia 2017 Laura Barjum and one Hector Cermeno, which was posted on his Instagram page on Oct. 3.

“Ariadna never saw Pia as a competition, and it’s the truth,” Cermeno said in Spanish, as translated by Instagram.

“I actually saw her twice during the competition, once at the dining area and during rehearsals. But a person like a… a ghost! You see her and never again, like the exit signs! Nobody saw her,” Gutierrez said in Spanish, according to a translation by local pageant website Pageanthology 101.

The interview later circulated online and eventually caught the attention of Radost Todorova, who represented Bulgaria in the Miss Universe 2015 pageant. She then defended Wurtzhach’s victory and expressed her support for the Philippine beauty queen.

“Of course you didn’t see her! I remember you were always laughing at us, at our clothes and jewelry, at our walk and talk,” Entertainment News Portal quoted her as saying. “You were only with the other Latinas looking down on us!”

“I stand behind my words and that’s why we were all so happy Pia won. You need to be beautiful inside and out, not only looking like a Victoria’s Secret model and act like the queen of England!” Todorova added. “You will never be, unless you start acting like a decent human being!”

Following her initial reaction to Gutierrez’s remark on Wurtzbach, Todorova stressed that she did not mean to offend anyone.

“But after [five] years still commenting on the winner this way… as if she was nobody?!” she said in a statement on her Instagram page. “A ‘ghost’?! I mean — to be a beautiful person is something you don’t do at the esthetician’s cabinet, it’s something you accomplish at school and at your community!”

She then noted that probably every candidate in the said pageant would remember Wurtzbach. Todorova also highlighted how she became friends with her fellow contestants because they were “speaking, smiling and helping each other feel good about [themselves]!”

“We were there to embrace beauty! True beauty! And it has nothing to do with how you look but how you make people feel around you!” Todorova stressed. “That’s the beauty of being a queen! Remember it because everybody can be a queen!”

As she ended her post, Todorova encouraged her supporters to stop cyberbullying and to instead “[e]mbrace love and peace.”

Wurtzbach has not yet issued a statement on Gutierrez’s remarks. JB