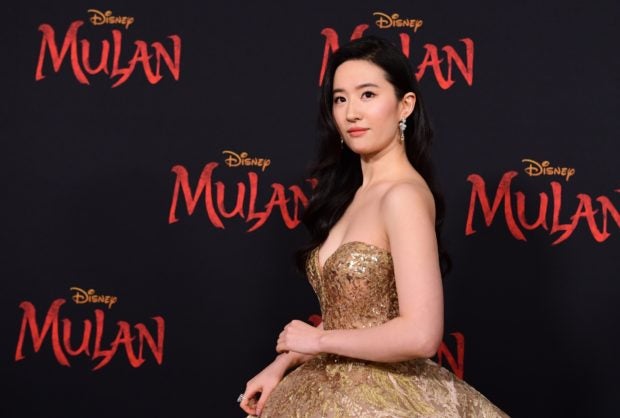 Pilloried internationally and given a lukewarm debut by Chinese cinemagoers, Disney on Friday discovered its $200-million live-action epic “Mulan” has at least one ardent fan — China’s firebrand foreign ministry.

The retelling of the legendary female Chinese warrior tale drew a backlash even before its official release when star Liu Yifei voiced her support for Hong Kong’s police as they cracked down on democracy protests last year.

This week it faced boycott calls globally for filming in Xinjiang — where rights abuses against the region’s Muslim population have been widely documented — and for thanking authorities from the northwestern region in the end credits.

But Chinese foreign ministry spokesman Zhao Lijian on Friday dismissed the controversy, saying it was “very normal” to thank the Xinjiang government for their help and shrugging off criticism by “some so-called human rights organizations.”

He went onto applaud Chinese-American star Liu as “the contemporary Mulan” and “a true child of China”.

Mulan opened in China on Friday and sold around 41 million yuan ($5.99 million) worth of tickets by the afternoon, according to ticketing platform Maoyan.

But the movie, which many have seen online, has already attracted a torrent of poor reviews and a 4.7 out of 10 rating on popular user review site Douban.

Some disliked its deviation from the original tale and new storyline, while others blasted the action scenes.

“In my mind, Mulan was originally ladylike and not a martial artist as a child,” one user wrote.

Another reviewer added: “The storyline is very poor and Mulan’s hero complex was highlighted without logic. The martial arts sequences were also weak.”

Others questioned why there were not more Chinese staff working on the film.

Amid the furor, the hashtag “Mulan” appeared to have been disabled on China’s Twitter-like platform Weibo, with the tag turning up no search results on Friday.

AFP understands that some state media have also been told to avoid covering the movie.

At cinemas in Beijing, however, several moviegoers were oblivious to the international outcry.

“Mulan is a household name. Different people may have different ways of understanding this story,” said Hu Xia, 46, who saw the movie with her son. “This time, I think they were successful.”

Another moviegoer, 30-year-old Alvin Ye, praised the movie for its portrayal of an extraordinary woman.