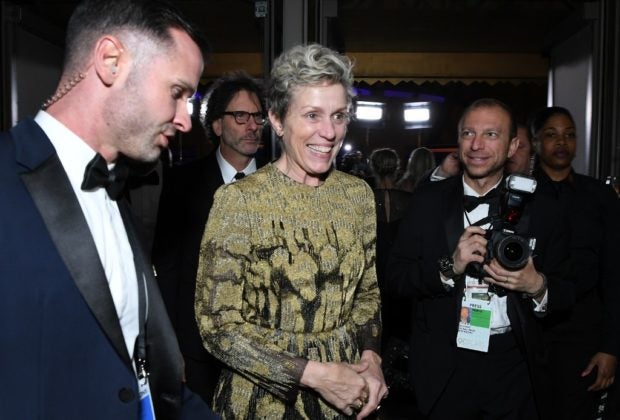 The movie about a community of elderly, nomadic idealists who roam across America in worn-out vans was greeted by raucous honking horns and flashing headlights at a drive-in United States premiere in Pasadena, on the outskirts of Los Angeles.

Hours earlier, double Oscar-winner McDormand had received loud applause in Venice for her role as a widow forced to take to the road after a mine closes, wiping her tiny community from the map.

“I told my husband… when I turned 65 I was gonna change my name to Fern, start smoking Lucky Strikes, drinking Wild Turkey and hit the road in my RV. I got to do that four years early,” McDormand told the California screening.

Speaking to an audience of Hollywood industry and press — unable to travel to foreign festivals this year due to coronavirus — McDormand said living on the road in basic conditions during filming had taught her humility.

“I didn’t know how to take a dump in my five-gallon bucket,” she joked.

The movie has received glowing reviews, with the Hollywood Reporter calling it “a unique portrait of outsider existence” and Variety a “tender ode to American independence.”

But a truce has been struck in 2020, with Toronto festival co-head Cameron Bailey telling AFP it “didn’t make sense to be competitive this year, with so much at stake.”

The night’s California screening was organized by the Telluride festival — one of several forced to entirely cancel its regular screenings due to a pandemic that has delayed the Oscars and halted filming across Hollywood.

Also debuting in multiple timezones this week was “One Night in Miami”, an adaptation of a play imagining a heated 1964 motel room conversation between Malcolm X, Muhammad Ali, Sam Cooke and Jim Brown.

Director Regina King (“Watchmen”) told a Toronto festival virtual press conference she “wanted to do a film that was a love story with a historical backdrop.”

As well as depicting the four men’s real-life friendship, the movie examines how each coped with the hostility faced by successful African-American men in the civil rights era.

Completed in the wake of George Floyd’s killing and mass anti-racism protests this summer, the movie’s themes are “just as relevant now as they were 60 years ago,” added King.

Halle Berry, another Academy Award-winning actress showing her debut feature as director in Toronto, said it was “heartbreaking” no other black woman had won the best actress Oscar since her triumph for “Monster’s Ball” almost two decades ago.

She stars as a former martial arts fighter struggling to regain custody of her son in “Bruised”, reportedly purchased by Netflix Friday, hours before its Toronto premiere.

Read Next
BTS revels in a milestone but misses celebrating with fans
EDITORS' PICK
House to probe Facebook takedown of gov’t accounts
Get 80% OFF Ignite 2020 Cyber Tickets starting 28 September
Water remains our saving grace right now
Feud is over: Velasco is Speaker on Oct. 14
Duterte meets with Cayetano, Velasco amid speakership issue
Smart poised to turn PH into ‘Smart 5G country’ with nationwide rollout
MOST READ
Velasco to take over as Speaker on Oct. 14
Gun attack in PMA: Air Force man killed, 2 others wounded
‘I offered to resign’ because of endless corruption, says Duterte
Duterte meets with Cayetano, Velasco amid speakership issue
Don't miss out on the latest news and information.

Feud is over: Velasco is Speaker on Oct. 14