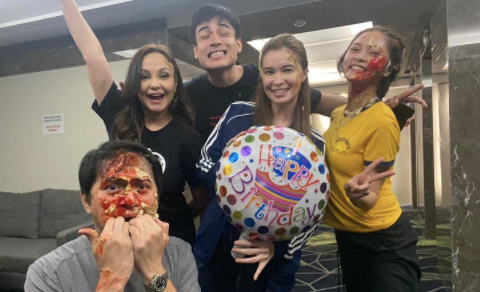 Veteran actress Eula Valdes shared with fans how the “Love Thy Woman” cast grew closer and closer over time as she bid farewell to the show, which aired its finale yesterday, Sept. 11.

Valdes took to Instagram on the same day to give everyone a peek at how she and her fellow actors went from being formal to one another to being members of a “crazy” family.

In the first of her four-part series of posts, Valdes noted how the cast already knew each other but still acted formally and was yet to loosen up.

The said post came with official photos of the cast, aptly dressed in formal clothing, and with a short clip of Valdes in character as Lucy Wong.

Sunshine Cruz, who played Kai Estrella in the series, meanwhile, commented on Valdes’ post to express how grateful she was to have acted alongside Valdes.

“Miss Eu!!! It is an honor to work with you. Grabe napakagaling, napakaganda at napakabait mo (Oh how very talented, gorgeous and kind you are)! I will be forever grateful that I was [able] to work with ‘THE EULA VALDES!’ I will miss you!” Cruz said.

Valdes then replied:”@sunshinecruz718 maraming salamat (thank you very much) the honor is mine, Shine [heart emoji] i will miss you too. Sepanx [sad emoji].”

In the second post, Valdes shared several photos of the cast from behind the scenes, noting that they were starting to bond then.

Jennifer Sevilla, who played Carol Teng in the show, likewise expressed her gratitude for having been able to work with Valdes, commenting: “Honored and happy to work with you Miss Eu! Kaka miss lahat (I miss everything).”

In the third post, Valdes again shared several behind-the-scenes photos with the cast and crew, as well as a video of her hilarious reaction to the tight sleeves of her dress.

“Kampante at nag loosen up na kame sa isa’t isa. Nag eenjoy na kame (We were comfortable and loosened up to one another. We were already having fun),” she said in the post.

In the said video, Valdes pokes fun at how tight her sleeves are, joking that she feels like a T. Rex while she and Yam Concepcion, who played Dana Wong, laugh uncontrollably at the veteran actress’ antics.

Valdes’ fourth and last post fittingly came with photos of the cast and people behind the series bonding and having a good time at what appears to be a birthday party.

(Solid! An unruly bunch, there are no actors here! Everyone is crazy […] “Love Thy Woman” family… sigh… I will miss you all. I love you.)

The said photos that came with the post gave several glimpses of how the “Love Thy Woman” family is together, with actors and actresses having cake all over their faces and clothes.

In one of the photos, Valdes shoves a cake onto the face of Dominic Ochoa, who played Simon Cruz in the show. Other “Love Thy Woman” actors Xian Lim and Kim Chiu, who respectively played David Chao and Jia Wong, can also be seen with cake on their faces.

(Miss Eu! I will miss your laughter! This was my first time bonding with one Miss Eula, who is so witty and funny and laughs so often!)

“You are one of the best, true and real people na nakatrabaho/nakasama ko (that I have worked/bonded with)! Love you miss eu!!!!” she added.

“Love Thy Woman,” which aired its first episode on Feb. 10 this year, ended after around seven months and 95 episodes.  /ra

Kim Chiu on working with Christopher de Leon: ‘Professionalism at its finest!’