Lots of stuff has been coming out on several SocMed platforms about this boy, my eldest, me. All lies. I DO NOT KNOW WHAT IS OR HAS BEEN GOING ON. NO ONE TELLS ME, &I DON’T ASK. But I’ll tell you one thing that is TRUE. God knows I love PJ. We have become friends over the years, talked about life & work. His son Iñigo has been nothing but respectful & sweet to me. I do not & will not have a problem with Piolo at all in any area of my life or in our family. I love you, PJ. Thank you for your love, respect, & friendship. God bless you always!❤️😘🙏🏻 @piolo_pascual

A post shared by ActorSingerPresenter (@reallysharoncuneta) on Aug 31, 2020 at 7:19am PDT

“So much fake news coming out…,” the Megastar said in an Instagram post on Tuesday, where she shared a video of her and Piolo singing.

“Lots of stuff has been coming out on several SocMed platforms about this boy, my eldest, me. All lies,” the veteran singer-actress added.

Sharon also defended Piolo, whom she affectionately calls as “PJ”,  saying that she “loves” him and has been friends with him over the years.

She also complimented Piolo’s son Iñigo, who she described as “respectful and sweet to me.”

“I do not & will not have a problem with Piolo at all in any area of my life or in our family,” said Sharon.

A netizen, @mintflavah, told Sharon that there has been “fake news” circulating that KC is pregnant with Piolo’s child.

“There’s fake news circulating that she’s preggy and getting married, and the comment section is off on YouTube, afraid of being bashed,” a netizen said in the vernacular. 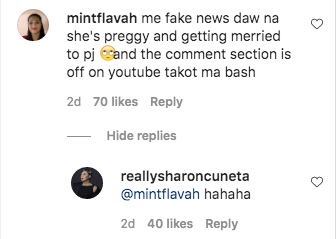 In response to the comment, Sharon simply laughed off the rumor.

Meanwhile, another netizen, @rltrmarissafe, likewise told the Megastar about the rumors that her eldest daughter and Pascual are set to marry.

“Wala din akong kaalam-alam (I do not know anything), as God is my witness,” Cuneta replied to the netizen.

It was in October 2010 when Piolo confirmed that he and Concepcion are in a relationship.

However, KC, in an interview on “The Buzz” in November 2011, confirmed that she and Piolo have parted ways.

In an interview with G3 San Diego, KC looked back on her romance with Piolo, describing it as “very real” since it was her “first announced relationship.”

KC recalls relationship with Piolo: ‘It was very real for me’

Read Next
Ken Chan opens up on filming upcoming movie ‘My First and Always’ amid COVID-19
EDITORS' PICK
US health officials: More data needed on UK variant warning
New Year, New Rediscoveries
Is your company a growth champion? Stand up and be recognized!
DOH reminder: Covid-19 vaccine ‘not a magic pill’
Acer Philippines welcomes you to its first flagship store
DND sees AFP gaffe in UP Red-tagging
MOST READ
Why Kris Aquino sleeps with her pearls
Dustin Poirier knocks out Conor McGregor at UFC 257
AFP to apologize to UP alum falsely included in list of NPA members — Lorenzana
Cavite gov’t weighs airport deal termination
Follow @KHallareINQ on Twitter
Don't miss out on the latest news and information.