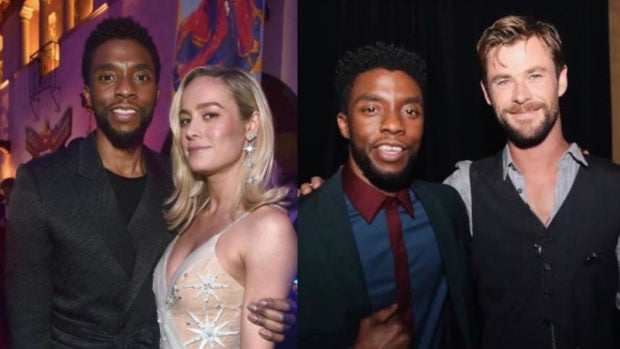 The actors who played as the mighty heroes from Marvel Cinematic Universe once again assembled, this time to honor a fallen brother, Chadwick Boseman, who recently lost his battle with cancer.

Boseman, 43, died in Los Angeles yesterday, Aug. 28, surrounded by his loved ones. The “Black Panther” star had been silently battling colon cancer after being diagnosed four years ago.

Larson, also known for her role as “Captain Marvel,” described the actor as someone “who radiated power and peace” and someone “[who] stood for so much more than himself.”

“I’m honored to have the memories I have. The conversations, the laughter,” she added. “My heart is with you and your family. You will be missed and never forgotten. Rest in power and peace my friend.”

For Holland, star of the recent “Spider-Man” films, Boseman was a role model to him and “to millions of others around the world.”

“Chadwick, you were even more of a hero [off-screen] than on,” Holland said. “You brought joy and happiness to so many and I’m proud to have been able to call you a friend.”

Hemsworth, who played the mighty “Thor,” and Renner, known for his role as Hawkeye in several “Avengers” films, are both heartbroken over their co-star’s sudden passing. The two also sent their love to Boseman’s family.

“Gonna miss you mate,” Hemsworth said. “One of the kindest most genuine people I’ve met.”

“Chadwick is an inspiration, a warrior with a big kind heart that I’ll never forget,” Renner declared.

Pratt, aka Star-Lord, likewise sent his prayers to the late actor’s family. “The world will miss his tremendous talent,” he stated.

Saldana, best known as Gamora in “The Guardians of the Galaxy,” promised to tell her sons about Boseman forever.

“Rest in [power,] King T’Challa,” Saldana said, referring to the actor’s character in the MCU.

“You were one of the classiest men I have ever met in my life,” she revealed. “It was an honor to have shared minutes with you [on-screen] and to have crossed paths with you during press.”

Despite the briefness of their time together, Boseman left a lasting impression on Saldana because of his “energy, poise and gentle manner.”

The “Captain America” star called Boseman a “true original” and a curious artist who was always dedicated to his work. Meanwhile, Ruffalo and Jackson referred to the actor as their “brother.”

Boseman’s “Avengers: Endgame” co-stars are just some of the numerous actors, directors and friends from other industries who honored Boseman for his exceptional talent and memorable existence.  /ra