WATCH: Jennifer Garner gets emotional after finishing ‘The Office’ 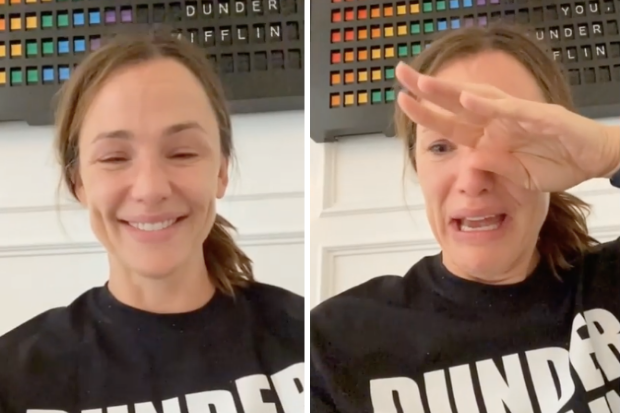 Jennifer Garner cries after watching the finale of “The Office.” Image: screengrab from Instagram/@jennifer.garner

Even Jennifer Garner could not help but bawl her eyes out after finishing the American version of hit mockumentary sitcom “The Office” for the first time.

Garner took to Instagram on Aug. 25 to share her thoughts after watching the series’ finale through a video, which she accidentally filmed in slow motion.

“My kids and I have spent months piled on the couch working our way through ‘How to Behave as Grownups,’ aka #TheOffice. Apparently we are sensitive people—the finale hit us pretty hard,” she said in the post’s caption.

In the video, where Garner is hilariously crying in slow motion, she shares how “The Office” took her in an emotional ride.

“When I realized I’d accidentally shot my farewell testimonial in slo-mo I realized: your Monday might need this, too,” she said in the caption.

The actress also fittingly wore a “Dunder Mifflin” t-shirt when she filmed herself while the words “Thank you, Dunder Mifflin” can be seen written in the background.

“You’ll never guess what show my kids and I watched an episode a day of throughout quarantine? And guess what, we finished it, and guess what, it gave me some really big feelings,” Garner said in the clip.

Garner also poked fun at herself as she narrated over her video, saying, “Oh my goodness! Look who needed a big cry! And maybe a shower would have been helpful.”

“But it’s just nice to know you can still just feel so much passion about something, right?” the actress stressed.

She also asked those who have not seen the show yet to check it out, before she ended the video (not in slow motion this time) quoting an iconic line by Rainn Wilson’s Dwight Schrute, “Bears. Beets. Battlestar Galactica.”

“The Office,” which aired on NBC from 2005 to 2013 with nine seasons, has become a sitcom classic over the years and bagged several awards for being one of the best television comedy shows in the past two decades.

The critically acclaimed show is an American remake, adapted by Greg Daniels of the British show of the same name, which was created by Ricky Gervais and Stephen Merchant.

Several celebrities and fans alike loved Garner’s reaction to the show, with some of  “The Office” cast members themselves showing their appreciation for the actress.

Fischer, for one, commented on the actress’ post, “Oh Lady!! This is the sweetest and most wonderful post!! Sending you lots of love and if you want to start over @angelakinsey and I are re-watching for the podcast.”

Meanwhile, Kaling, who is also one of the show’s writers, showed her appreciation by leaving a simple heart emoji in the comments section. 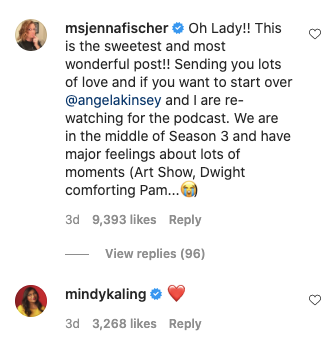 “@jennifer.garner thank YOU for this post. For showing ur humanity. It was appreciated in my house tonight. And yes- the finale hits me in the feel bone as well,” he said.

“Omg!! @jennifer.garner I am only just seeing this (we had no air conditioning for the day so long story short but I’m only just catching up on things)!! I love this. I love you and your family and just so you know the finale makes me bawl my eyes out too!” Kinsey likewise said of Garner’s small tribute to the show.

The cast of “The Office” had a virtual reunion last May when Krasinski officiated the wedding of their fans through his online show, “The Good News.”  /ra