Pioneering stand-up comic promises that both the prosecution and defense panels will be reresented in the show through witnesses that may include Pacman and Pidol
Philippine Daily Inquirer / 05:54 AM May 04, 2012 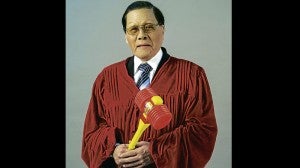 What fireworks await the public when the Corona impeachment trial resumes?

Willie Nepomuceno “interviews” Senator-Judge Juan Ponce-Enrile “and other significant characters” for “Trial & Error,” which goes onstage at the Music Museum in Greenhills on May 26.

The pioneering stand-up comic promises that both the prosecution and defense panels will be represented on the show through hostile and expert witnesses that are likely to include Manny Pacman, Tito Pidol the Comedy King, “two or three former presidents and, of course, the incumbent.”

What can you say about your high trust rating of 72? That’s higher than what the President got! Are you flattered?

I have mixed feelings about that. In a way I am flattered, but in a way I am also embarrassed — because the basis of the rating is a prophylactic.

You are the oldest senator in the Philippine Senate.

People know that. But hardly anyone knows that I’m not only the oldest senator — I’m older than the present setup of the Philippine Senate, which is that of nationally elected senators. I was born in 1924; this setup started in 1940!

At 88, you seem as physically fit and as mentally sharp as a much younger man. Have you discovered the fountain of youth?

They say you were the prime architect of Martial Law.

Not true. I finished Law, not Architecture.

One of the reasons that Ferdinand Marcos cited for declaring Martial Law was that your car was bombed by rebels or leftists. But others say you did it yourself.

You were a Marcos protégé but in the latter years of Martial Law, he seemed to favor General Ver more than you. What happened?

When it seemed you fell out of grace, you gravitated toward this group of young military officers who called themselves RAM. Kasama rito si Colonel Gringo Honasan, now Senator Honasan.

Yes, and I gave them that name. Hiram sila nang hiram ngarmalites, Uzis, grenades, bullets noon sa armory. Turned out, they were planning something. Napilitan na lang akong sumama sa kanila. If they got caught, sabi ko, I’d be implicated anyway, because I gave them their name.

Well, matagal na rin yun. I’m sure he wouldn’t mind if I revealed the other purpose of that tobacco now: ’Pag  na-corner siya, may pansindi siya ng bomba at kanyon!

President Cory Aquino appointed you to her Cabinet but you had a conflict with her and were forced to resign. What was that about?

We had arguments — or should I say healthy exchanges regarding the left… and the right. She thought I leaned too much to the right. Well,  she was right. How can the right be wrong? Right is right. And left is left. We couldn’t agree on the left and in the end I think the left prevailed. I left her Cabinet.

You ran for the presidency in 1998 but lost to Erap. Why do you think that happened?