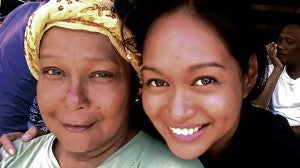 The singer-actress, known as the country’s Superstar, recalled that she briefly visited the island on the country’s southernmost tip years ago.

For her latest Tawi-Tawi “adventure,” she totally “immersed” herself, staying over two weeks, from April 14 to 30, for the shooting of Brillante Mendoza’s latest work, “Thy Womb.”

Mendoza won best director for “Kinatay” at the 62nd Cannes Film Festival in 2009.

“Thy Womb” is scheduled to premiere at an A-list international film fest.

The indie film marks her big-screen comeback after eight years, Aunor said. She had appeared in indie productions like Suzette Ranillo’s “Care Home” and Joey Gonzales’ “Ingrata” (both in 2006) during her stay in the United States. But “Thy Womb” is her biggest film since Maryo J. de los Reyes’ “Naglalayag” in 2004.

“Na-miss ko ang pag-arte,” she told Inquirer Entertainment in an interview held upon her return to Manila on May 1. 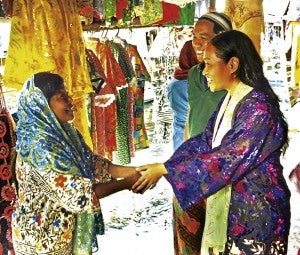 SCENE from “Thy Womb”: Nora with Nurjay Sahali and Mercedes Cabral. photo by Mark Joseph Griswold

In the movie, she plays a midwife who serves the seafaring Badjao and other indigenous tribes in Tawi-Tawi.

Their hosts, Gov. Sadikul Sahali and his wife Juana and daughter Vice Gov. Ruby Sahali and son Nurjay Sahali, assisted by the Philippine Marines and the Philippine National Police, made sure that the entire cast and crew remained safe during their stay, Aunor said.

She plans to return their kindness by asking friends from the industry to help the people in the small villages where they shot the film—specifically, Sitangkai, known as the “Venice of the Philippines.”

Playing a midwife, she saw with her own eyes the residents’ most pressing needs. “Kailangan nila ng gamot. ’Pag may manganganak, kailangan pang mag-bangka para makapunta sa ospital,” she said.

As expected, she and her co-stars — Bembol Roco, Lovi Poe and Mercedes Cabral—were mobbed by the residents.

Poe said that the Superstar took pains not to intimidate her co-workers. Cabral agreed: “She’s down-to-earth. Motherly. I was in my dressing room once, fixing my stuff, and someone knocked.” 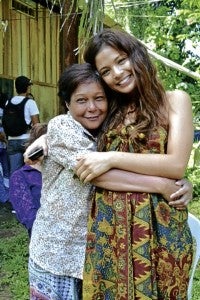 When Cabral opened the door, she saw the Superstar holding a bowl of noodle soup. “She gave it to me,” Cabral said. “I was really touched. She made me realize that not all superstars are air-headed snobs. It’s a shame that other so-called stars, some who are not even as big as her, have lousy attitude.”

Although far from Manila, word on the campaign to declare her a National Artist had reached her.

Aunor will celebrate her 59th birthday on May 21 in the US.

She is set to leave for Boston on May 19 for her throat surgery on May 23. “Sana nga maging okay na ang boses ko,” she said.