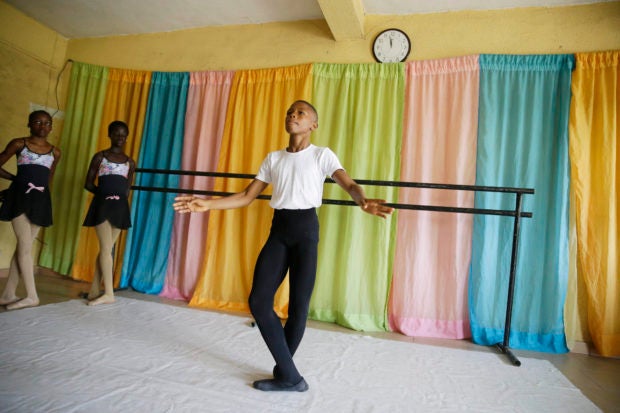 LAGOS, Nigeria — When Anthony Mmesoma Madu was videoed practicing ballet barefoot in the drizzling rain in Nigeria earlier this year, the 11-year-old thought the footage would be used for a common film study session.

Instead, the cellphone video of him performing the pirouette without shoes on the unevenly wet concrete was seen by a much bigger audience. The video has garnered more than 20 million views on social media including by Oscar-winning actor Viola Davis and Cynthia Erivo, who has won Grammy and Tony awards.

Madu’s practice dance session was so impressive that it earned him a ballet scholarship with the American Ballet Theater in the United States. It also showed his community that anything is possible.

“I feel very, very surprised, very, very happy,” Madu said after his fellow students at Leap of Dance Academy staged a performance on a dirt street in Lagos, Nigeria, while tossing dust into the air in celebration.

“I thank God that he made the video to go viral,” he said.

Davis shared Madu’s video with her 1.4 million followers on Twitter. She wrote in the caption “Reminds me of the beauty of my people. We create, soar, can imagine, have unleashed passion, and love…. despite the brutal obstacles that have been put in front of us! Our people can fly!!!”

Erivo decided to sponsor Madu’s training and helped bring the video to the attention of the American Ballet Theater, said Laura Miller, a spokeswoman for the dance company.

“When I got that call that I won a scholarship to the U.S in the year 2021, I was very, very happy, I was like, ‘What? Is this what God can do?’” Madu recalled. Ballet, he added, “is hard to learn but if you put your effort, you can learn it.”

Madu is too young to physically travel and study in New York. The minimum age to be a student in the city and live in a dorm is 15, but he’s been offered a summer scholarship, with the possibility of him continuing this fall under discussion, Miller said.

Miller said the American Ballet Theater is currently working on a schedule for Madu that works with the six-hour time difference. The company is also talking to him about taking part in weekend programs.

The video was the idea of Madu’s trainer, Daniel Ajala, a self-trained ballet dancer. He’s also the founder of Leap of Dance Academy, which he started in 2017.

Ajala suggested the idea as a way for Madu to review his technique. He’s been a strong advocate in supporting his students to follow their dreams, despite their circumstances.

“I wanted to be able to give an opportunity to every child by making my program free so that they would be no excuse that any child could give that it was the reason they couldn’t pursue their love for dance,” he said.

Ajala said his dance school has received donations, which will be used to create a standard dance academy with housing.

“Some of our students have to walk one hour or there about to the academy so we wanted to have like a comfortable space for them to be able stay while they can’t go home.” CL