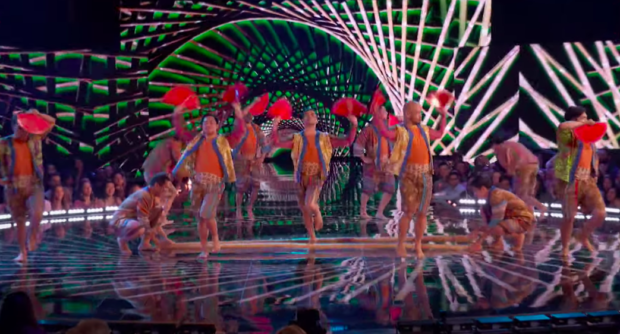 Hip-hop dance crew UPeepz showcased Filipino culture in a colorful and exhilarating routine at the “World of Dance” semifinals.

Aside from donning traditional garments and using fans as props, the crew also incorporated “tinikling” in their performance aptly to the tune of the “Black Eyed Peas” hit “Bebot.”

The whole routine, which ran for about a minute, was shared via social media and YouTube yesterday, Aug. 12, by the said NBC dance competition show.

Judge Jennifer Lopez immediately let out a loud “wow!” after UPeepz’s performance, while fellow judge Derek Hough pointed out how he loved that the crew drew inspiration from their own culture.

“You guys just like ooze passion. I just feel your passion for dance so much and I love the fact that you brought in your culture into this piece,” Hough said.

Hough noted, however, that the tinikling part of the routine kind of “felt like it dipped in energy,” but stressed that UPeepz still finished strong.

Ne-Yo shared the same sentiments on the said traditional dance, saying, “I love when the fans came out. The part that threw me was the bamboo part, but the things that I’ve come to know and appreciate you guys for was all there.”

He added that the entire performance was a roller coaster as “it had its ups and its downs.”

“You guys are a strong group, that’s why you’re here. You really feel like a crew and that’s what I like about the big groups. You know, when they really are good, they all dance almost as one, which I love,” Lopez, meanwhile, said.

“It’s really about the routine that you do. For me, it just didn’t all come together. There [were] moments that I love,” she added.

After garnering an average score of 89, the two-time World Hip-hop Dance champion crew did not make it to the finals.