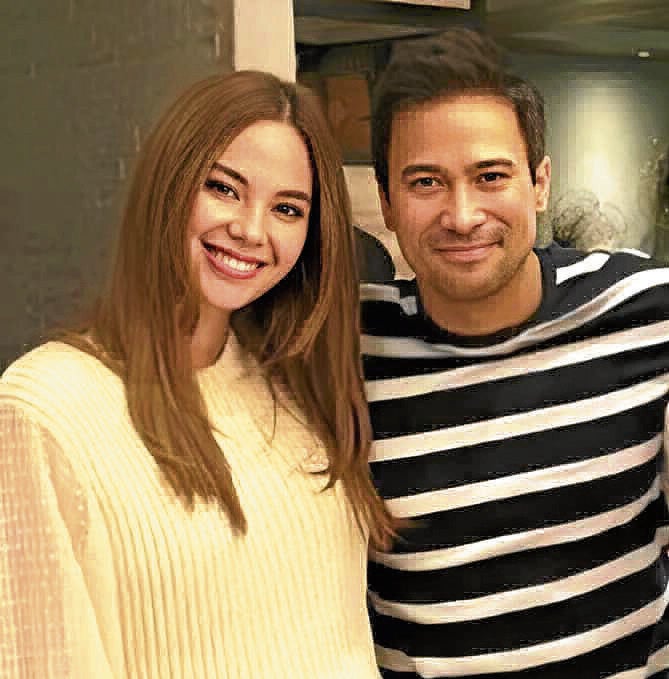 While Sam Milby believed that current girlfriend, 2018 Miss Universe Catriona Gray, is “the one” for him, the actor is also aware of the huge age difference between them and preferred to simply take things slow for now.

“I’m 36 and she’s 26; and she has just started her (show biz) career. It’s still too early (to settle down with her), but I do believe that she’s the one,” said the lead male star of the new Kapamilya teleserye “Ang sa Iyo ay Akin.”

During the virtual media conference for the drama series that also features Iza Calzado, Jodi Sta. Maria and Maricel Soriano, Sam was asked a “hypothetical” question: If there’s someone who would tell you that what is yours is also his, just like in Michael Jackson’s song “The Girl is Mine,” how would you react?

To this, the actor said: “If she’s really mine, then I will fight for her.”

Catriona and former beau, Clint Bondad, broke up in February 2019. However, Bondad made a buzz on social media recently with his series of strange and cryptic Instagram stories. He also sent an Instagram message to Sam.

In July 2020, Sam posted on Twitter that he would not simply “stand by and allow other people to take control of a narrative that is not theirs to tell.” This was in defense of Catriona, after malicious stories against her had circulated online. This also prompted Catriona to file a complaint before the National Bureau of Investigation against the person who allegedly leaked a “digitally altered” photo of her online.

In “Ang sa Iyo ay Akin,” Sam plays Gabriel, husband to Iza’s character Ellice. “I was so nervous going into this project because I know that they’re all good actors. It’s my second time to work with Jodi, but my first with Iza and Ms. Maricel. I was feeling pressured at first, but later realized that I got along really well with Iza early on. This made things so much easier for me on the set.”

He added: “Nanay Marya is so supportive. She helps out so much. I can be childish as a person. I’m also often having a hard time with the language, but she really showed patience and support in all of our scenes. Many times, I would doubt myself but what she would tell me would boost my confidence. Actually, the whole cast is very generous in terms of giving their support. I really appreciate my coactors. I’m so happy to be a part of this project.”