Matteo Guidicelli opens up on proposing to Sarah, giving his grandmother’s ring

Matteo Guidicelli and Sarah Geronimo have been happily wed since February, but both have not said much about how they got engaged.

That said, the actor gave a glimpse of how special the proposal was for him on writer G3 San Diego’s Instagram Live Monday, Aug. 17.

When asked about the happiest day they spent together, Guidicelli struggled to choose, and finally said that it was “the day I proposed.”

The couple had already been together for six years when he thought of popping the question.

“I planned it but when it was the time for it, I couldn’t do it,” he recalled. “The words were in my lips and it couldn’t come out.”

There was even more than one ring involved. One was an heirloom engagement ring that belonged to his grandmother and the other was made by Guidicelli’s brother-in-law who is a jeweler. 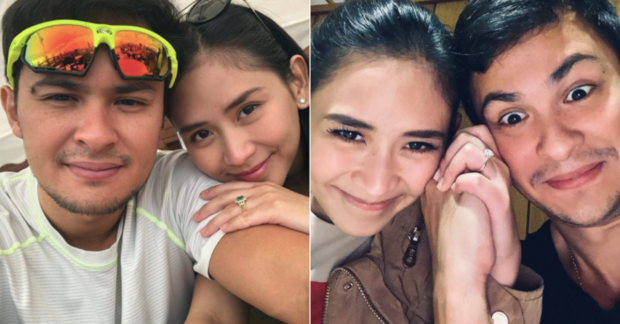 “That first ring, I’m proud of it, I’m very proud that it was… my grandmother’s ring,” he said. “I’m very proud na (that) it did not need readjusting or anything.”

The actor also discussed how he and the pop star were destined for each other.

“God placed us in the same space, at the right time when we were both ready,” he said, later explaining, “I don’t wanna say ready. I don’t think you’ll ever be ready for something.”

“You always have to trust, especially trust your partner. Ako (Me) I trust Sarah so much, and I’m very proud of her and she’s an incredible person that I trust fully.”  /ra

Matteo Guidicelli on being ‘imperfect’ for Sarah Geronimo: ‘Every day, I try to be the best for her’