Matteo Guidicelli on being 'imperfect' for Sarah Geronimo: 'Every day, I try to be the best for her' | Inquirer Entertainment
Close
menu
search

Matteo Guidicelli on being ‘imperfect’ for Sarah Geronimo: ‘Every day, I try to be the best for her’ 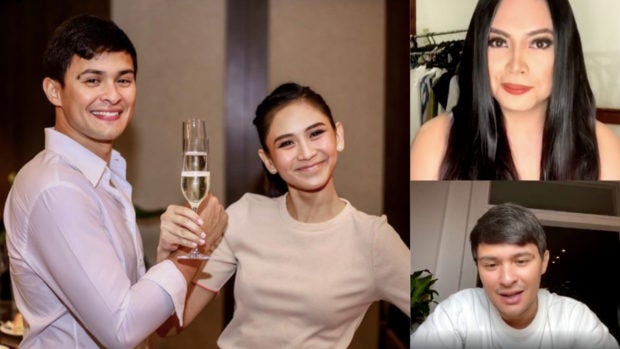 While speaking about the growth of his career as an actor, Matteo Guidicelli also commended his wife Sarah Geronimo for her work ethic and dedication in perfecting her craft as a singer.

Guidicelli had a meaningful discussion with entertainment journalist G3 San Diego about his road to show business, from being a race car driver to a model-turned-actor, as seen on San Diego’s Instagram post yesterday, Aug. 17.

The actor said that at the beginning of his career, he was concerned about “what project would make you sikat (famous)?” But now that he has established his career, he chooses to be more dedicated to projects and activities that could change another person’s life.

On marriage, Guidicelli revealed that he always imagined himself getting married “young,” around at least the age of 25. He said he wanted to be a “one-woman man” just like his father.

San Diego commended the actor’s dedication to “fight” for his relationship with Geronimo. Reminiscing on how he pursued his wife, he revealed that at first, it was “very very hard to approach” Geronimo because there were always a lot of people around her.

Guidicelli called himself “the biggest torpe in the world” during his first few attempts to approach the actress. The actor said that “every single day is a dream” now that Geronimo is his wife.

San Diego also asked the actor what quality he thinks he possesses that made him succeeded in pursuing the pop star royalty.

“I’m so far from perfect,” Guidicelli replied. “Every single day I try to be the best for her.”

Instead of going into details about his qualities as a husband, the actor explained why he is “extra proud” of Geronimo for turning into the woman that she is now. Guidicelli said that the audience does not see how hard the pop star works to perfect every performance she does.

“For two days G3… she’s been inside the studio for two days, she’d only come out for a meal. She’s recording for ‘ASAP,'” Guidicelli said. “That’s why she’s so good at what she does. She’s a perfectionist.”

“Kung alam lang ng mga tao (If only the people knew) how hard[working] and passionate she is,” he added.

The actor disclosed that when Geronimo is up on stage, he is constantly amazed by how good she is.

“Every time I see her perform on stage I’m like ‘wow that’s my wife,’ like I forget that’s the person I live with,” he said.

The celebrity couple tied the knot last February through an intimate wedding ceremony. However, the event was marred by controversy after the actor was accused of punching his wife’s bodyguard during a commotion at the reception. JB