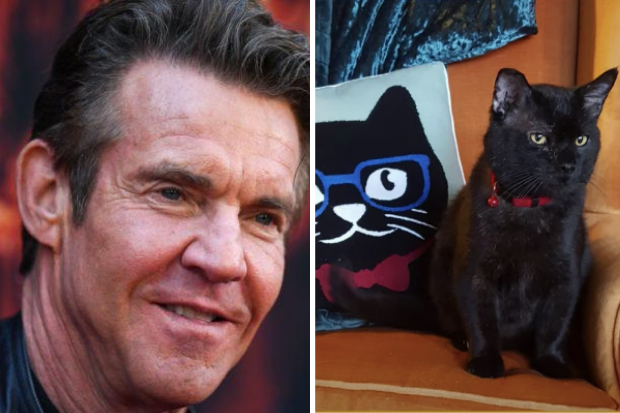 Hollywood actor and podcaster Dennis Quaid could just not let the opportunity to adopt a feline friend who shares the same name as his pass.

Quaid found out about his name-sharer through the “Clear the Shelters” initiative of NBC and Telemundo-owned stations, as per NBC-affiliate television station WSLS-TV on Aug. 12.

The actor, who adopted Dennis Quaid (the cat) from the Lynchburg  Humane Society, said that he was “out to save all the Dennis Quaids of the world.”

“It was really off the wall, but I just couldn’t resist. I had to,” Quaid was quoted as saying. The said TV station introduced Dennis Quaid, a local cat, to their viewers only last week.

Quaid also hosts a podcast with Jimmy Jellinek titled “The Pet Show,” in which they talk about all things related to pet culture, making him quite the perfect new owner of Dennis Quaid (the cat).

Under the “Clear the Shelters” initiative, the said stations help many dogs and cats get adopted by featuring them in stories and introducing them to willing fur parents.

Upon finding out about the famous cat, Quaid and Jellinek reached out to the Lynchburg Humane Society staff, who at first thought that they were internet trolls.

“I was like there is no way this is real, like, someone is pranking us,” Lynchburg Humane Society adoption center manager Danielle Ulmer was quoted as saying.

They eventually found out that it was the real deal when they talked to Quaid himself via a video call, where the actor was first introduced to Dennis Quaid (the cat) for the first time, albeit virtually.

Ulmar revealed that they named the cat Dennis Quaid in line with their practice to name their animals after actors, movies or books they like or are obsessed with.

“We take in about 4,000 animals a year, so we really just try to come up with creative names and just not have the same name twice,” Ulmer was quoted as saying in WSLS-TV’s report yesterday, Aug. 13.

“A lot of times if we watch a good movie or are super obsessed with this book or this actor or something like that, we’ll just throw the names out there just to try to get more creative,” she added.

Jellinek is set to fly from Los Angeles to Lynchburg in Virginia, USA, this weekend to pick up the new feline companion, who happens to be his second friend named Dennis Quaid.

Quaid, a known animal lover, last year starred in the film “A Dog’s Journey,” the sequel to 2017’s “A Dog Purpose,” where he also played the lead role. Ian Biong /ra