LOOK: John Regala discharged from hospital, on his way to recovery | Inquirer Entertainment

LOOK: John Regala discharged from hospital, on his way to recovery 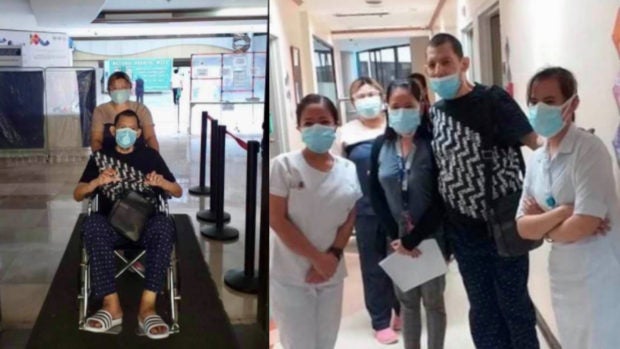 John Regala wheeled out of the hospital (L); Regala with the hospital staff (R). Image: Facebook/Aster A. Amoyo

John Regala was finally able to leave the hospital to continue his recovery at home, after being confined for eight days.

The veteran actor has been discharged from the National Kidney and Transplant Institute (NKTI), as per TV host and journalist Aster Amoyo’s Facebook post yesterday, Aug. 12.

Regala has been suffering from severe gout and liver cirrhosis. After complaining about experiencing extreme pain, he was taken to the hospital on Aug. 4.

“Praying that he continues to get better [every day,]” she added. “Many thanks to all those who donated and helped John on his way to recovery.”

After eight days of confinement at the National Kidney and Transplant Institute (NKTI), actor John Regala is now…

When asked whether or not Regala has fully recovered, Amoyo said, “Not totally [but he will continue his] medication at home.”

Amoyo previously disclosed that she, together with Regala’s other concerned friends, wanted the actor to stay in the hospital for a few more days. However, Regala apparently insisted on checking out on Aug. 12.

Regala earned the sympathy of his colleagues and supporters last month after being spotted asking for help from strangers while he was suffering from nausea in Pasay City. The actor revealed during an interview that he is all alone and has not been in touch with his relatives since his mother passed away.

Some of his friends from the industry including Amoyo, actors Chuckie Dreyfus and Nadia Montenegro, began a fundraiser for Regala to help with his medical bills and other expenses.

While he was confined at the hospital, the actor was also able to reconnect with his son John Paul Kieffer, who is now living in the United States. JB