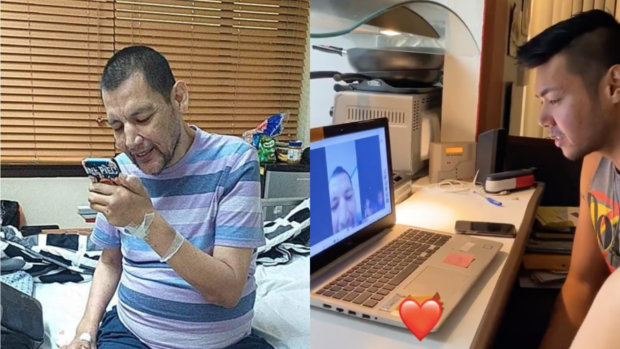 John Regala has finally reconnected with his biological son John Paul Kieffer as he continues to recover at the National Kidney and Transplant Institute.

The actor’s ex-wife, Aurina Alvarez Manansala Hunt, posted a snippet of the father and son’s call on her Facebook page earlier today, Aug. 11. John Paul Kieffer and Hunt are now based in the United States with Hunt’s new husband.

The 18-second video shows John Paul Kieffer speaking with his father through a laptop as he thanks Regala, whom he called “Papa John.”

Before they ended the call, they said “I love you” to each other. Regala then expressed that it was nice to hear the phrase from his son.

During the conversation with his ex-wife and Tulfo, Regala expressed that he wanted to visit his son and Hunt in the US. Hunt then appealed to their adopted son Gilbert to reach out to Regala as he continues to recover.

Hunt also stated that Regala has another child named Heidi, whom he adopted with his second wife, Gina Alonzo. Meanwhile, a certain John Santos recently claimed that he is another biological son of Regala.

Santos explained to Tulfo that his mother, Vilma, was an entertainer in Japan whom Regala had made pregnant. Following his claim, Regala and Santos have agreed to undergo a DNA test to verify if he is indeed Santos’ biological father.

The two have already undergone the test, as per the Philippines’ Ultimate Showbiz Hub yesterday, Aug. 10. However, the results have yet to be disclosed.

Regala made headlines after he was seen by a food delivery driver along Barangay 183 in Pasay City last month, suffering from headache and asking for help.  /ra