Broadway musical on Da Vinci’s ‘Salvator Mundi’ in the works 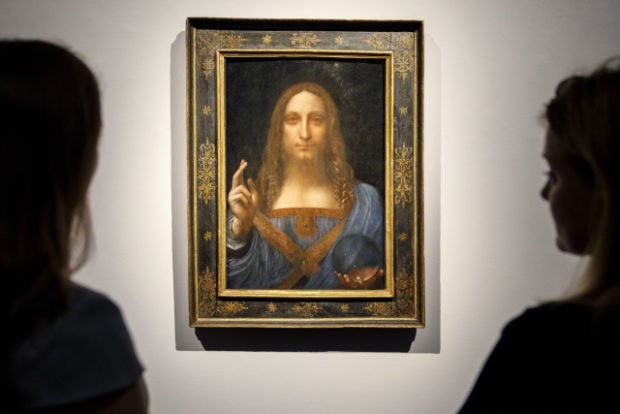 After making auction history at Christie’s New York, Leonardo Da Vinci’s “Salvator Mundi” will be at the center of a new Broadway musical. Image: AFP/Tolga Akmen via AFP Relaxnews

After selling for a historic $450 million in 2017 at Christie’s, Leonardo Da Vinci’s “Salvator Mundi” will now take the stage as the subject of a new Broadway musical.

The forthcoming musical has been described as “mix[ing] the historical reportage of ‘Hamilton’ with the fantasy and delight of Willy Wonka’s golden ticket.”

“It will follow the story of how a shredded, scratched wooden panel painting of Jesus purchased for $1,100 in 2005, evolved to become the Leonardo Da Vinci masterpiece — lost for over 500 years — titled ‘Salvator Mundi’ that in 2017 was auctioned at Christie’s auction house for over $450 [million],” Caiola Productions said in a statement.

Writer and dramatist Deborah Grace Winer will write the book accompanying the show, while the Art Newspaper reports that Caiola Productions “is still talking with composers and lyricists.”

Although details about “Salvator Mundi! The Musical” are still scarce, the production company has announced that the show is scheduled to make its Broadway debut in 2022.

Since its record-breaking sale at Christie’s New York, “Salvator Mundi” has attracted much speculation about its rumored ownership by a close ally of Crown Prince Mohammed bin Salman of Saudi Arabia, as well as the current location.

While the Louvre Abu Dhabi inexplicably postponed its much-anticipated unveiling in 2018, the Renaissance masterpiece was more recently expected to make an appearance during the Louvre’s Leonardo Da Vinci retrospective.

Despite the museum’s best efforts, visitors of the blockbuster exhibition did not have the opportunity to see “Salvator Mundi” alongside other masterpieces by Da Vinci.

Intrigue also follows the portrait regarding its attribution to the Italian master, which has been contested by multiple Leonardo experts despite Christie’s claims that the painting’s authenticity was confirmed after “more than six years of painstaking research and inquiry.” RGA