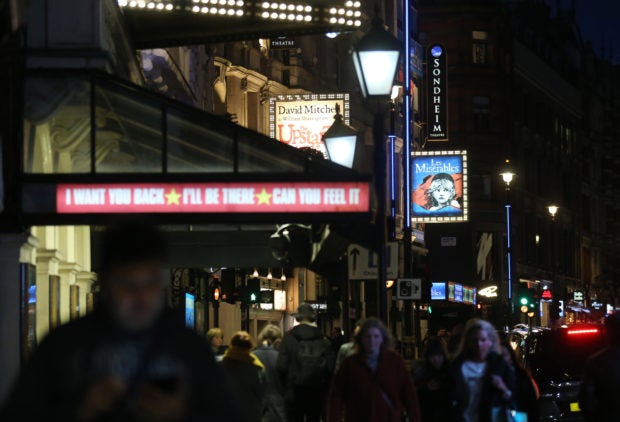 Shaftesbury Avenue on March 12, 2020 in the theaters and restaurants district of West End in London. Image: AFP/Isabel Infantes

The immersive theater experience is planning to reopen in London’s West End in October, although the British government still has to announce when theaters across the United Kingdom will be able to raise the curtain again.

Producers Louis Hartshorn and Brian Hook have adapted “The Great Gatsby” in line with the government’s social-distancing regulations, resetting the production as an Art Deco masquerade ball in which audience members will be required to wear masks and gloves.

The stage adaptation of F. Scott Fitzgerald’s novel has also been adjusted to avoid all performances deemed high risk, such as a group charleston for 250 people, according to The Guardian.

Crew and audience members will undergo temperature checks on arrival at the West End venue, which will be deep cleaned before and after every performance.

The capacity of the West End venue will be significantly reduced in order to allow audience members, coming as individuals or in household groups, to keep a safe distance from one another throughout the immersive performance.

“We want to offer something for people to look forward to following this extended lockdown. Our show has several inherent features that make it safer than a trip to the supermarket, so we’re embracing that and innovating. Hopefully we can provide a blueprint for other productions to open safely and be part of the process of restoring employment and the economy of the creative industries,” Hartshorn and Hook said in a statement to The Stage publication.

While audiences have to wait a bit longer for the return of “The Great Gatsby”, the Old Vic has announced a series of “socially distanced performances” of Matthew Warchus’s adaptation of “Lungs” in June.

Actors Claire Foy and Matt Smith will perform Duncan Macmillan’s play to an empty auditorium, with each performance being available to watch online to up to 1,000 people in an effort to replicate the London theater’s usual capacity.

Additionally, the Old Vic has confirmed its plans to stream a series of rehearsed play-readings and archive productions, starting on June 5 with “A Monster Calls”. RGA