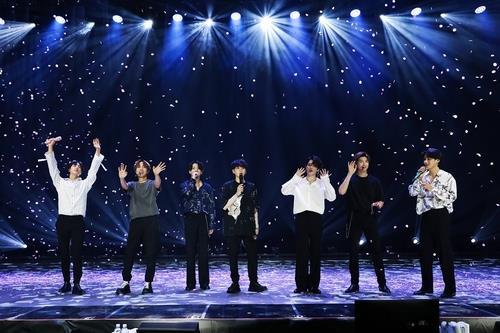 SEOUL — K-pop giant BTS won three nominations for the 2020 MTV Video Music Awards in the United States, according to the American television network.

The South Korean septet’s “ON,” the lead song on the band’s album “Map of the Soul 7,” was nominated in the categories of Best Pop, Best Choreography and Best K-pop, according to MTV’s website.

“ON” peaked at No. 4 on the Billboard Hot 100 upon release its release in March, the strongest showing ever for a K-pop group on the American music chart.

Other nominees for Best Pop include Halsey’s “You Should Be Sad,” Jonas Brothers’ “What a Man Gotta Do,” Justin Bieber’s “Intentions” featuring Quavo, Lady Gaga’s “Rain On Me” with Ariana Grande and Taylor Swift’s “Lover.”

Voting has begun on MTV’s website for 15 categories, and the event will be held live on Aug. 30. (Yonhap)

Read Next
Yukika’s journey from Japanese actress to K-pop artist
EDITORS' PICK
Been there, done that but what’s the difference between MECQ and GCQ?
Smart 5G goes live
A gem of a residence in the new normal
Water remains our saving grace right now
BREAKING: 3,226 latest COVID-19 cases bring PH’s total to 106,330
PNP: Checkpoints back in MECQ areas
MOST READ
MECQ guidelines in infographics
Health workers decry colleague’s death from virus; accuse gov’t of neglect
Lacson takes up cudgels for health workers ‘threatened’ by Duterte
MECQ in NCR, other areas: Mass transportation suspended, quarantine pass required anew
Don't miss out on the latest news and information.