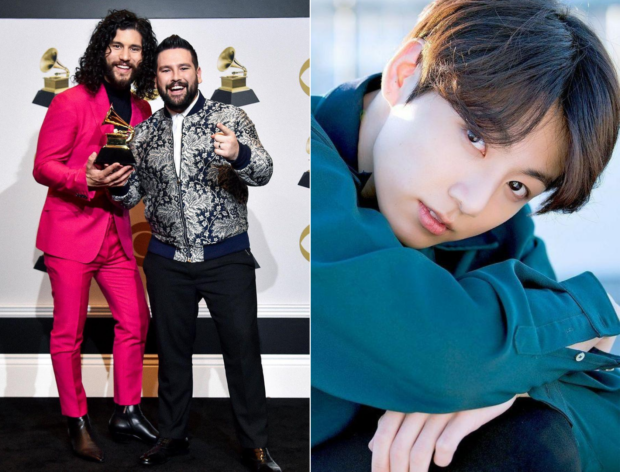 The South Korean star impressively crooned the song “10,000 Hours” as if he owned it, and shared his short cover with fans on BTS’ official Twitter account on Tuesday, July 28, which he deleted minutes after posting for unknown reasons.

However, before the tweet got deleted, the American singers-songwriters got to read it as they expressed their appreciation for the K-pop idol’s euphonious version of their song. They replied to his tweet: “this sounds amazing (two yellow hearts emoji) thank you so much for singing it!”

thank you so much for singing it!

Even if the recording was suddenly deleted, the 22-year-old “Euphoria” singer later on tweeted a link to his cover that was already uploaded to Soundcloud, whose caption reads, “10000 Hours Repeat,” plus a purple heart emoji.

Shortly after BTS’s Army fans made Jungkook’s cover dominate trends on social media, pop duo Dan + Shay noticed the cover again and left a comment on BTS’ tweet: “love this so much.”

love this so much 💛

Thrilled by the duo’s comment, one BTS fan suggested a collaboration with the Korean star, to which the duo replied, “we would love to.”

we would love to 💛

Meanwhile, it is no secret that BTS’ Jungkook is a “Belieber” or a huge fan of Justin Bieber, as he has already done some covers of Bieber’s songs in the past, such as “2U,” “Nothing Like Us” and “Purpose,” and even danced to the iconic song “Sorry.”

More so, the Canadian singer surely is aware of it as he once greeted Jungkook on his birthday on Twitter last year on Sept. 1.

Bieber has not reacted yet to Jungkook’s cover as of this writing, but fans are still hoping for the two superstars to make a song collaboration in the future.  /ra

Read Next
Sharon Cuneta hints at new project: ‘Start of something all-new!’
EDITORS' PICK
Metro Manila posts lowest temperature yet this ‘amihan’ season at 19°C
Acer starts the year off strong with the Aspire Vero National Geographic Edition
Over 3 Million worth of prizes to be won at Smart Padala’s SENDali Manalo Promo!
Gear up and get ready to play with Yamaha Mio Gear
DOH: 28,471 new COVID-19 cases in PH; active cases now 284,458
On Day 2 of implementation, gov’t says workers now exempt from ‘no vax, no ride’ policy
MOST READ
Derek Ramsay on being married to Ellen Adarna: ‘Gumaan ‘yung mundo ko’
Emma Stone calls Andrew Garfield a ‘jerk’ after he ‘lied’ about his ‘Spider-Man: No Way Home’ appearance
Lucky plants to grow in 2022
Retirements prompting major reshuffle in PH military
Don't miss out on the latest news and information.