South Korean pop superstars BTS have revealed to their fans that they are dropping a new single next month, ahead of their upcoming studio album to be released in late 2020.

On July 26, the boy group shared the news themselves during a live radio segment hosted by BTS members Jin, Jimin and Jungkook via V Live app, and said that they have prepared a new single for their ARMY fans, set for Aug. 21.

As they also prepare for their new album following their February-released record-breaking “Map of the Soul: 7” studio album, BTS decided to release a new song first so they could reach out to their fans as soon as possible, and share some positive energy amid the global fight against the coronavirus pandemic.

“Due to COVID-19, people around the world have been going through tough times and we wanted to share some positive energy with our fans,” BTS said.

During their “voice-only” livestream, they also hinted that their brand new single has an “upbeat” cadence with all-English lyrics like their previous songs “MIC Drop” and “Waste It On Me”, but the new track’s title has not been revealed yet.

The K-pop idols’ big announcement was seconded by their Korean agency Big Hit Entertainment in a notice released on their official fan community platform Weverse.

“On August 21, 2020, the new digital single by BTS will be released on Korean and international music streaming sites,” the agency said. 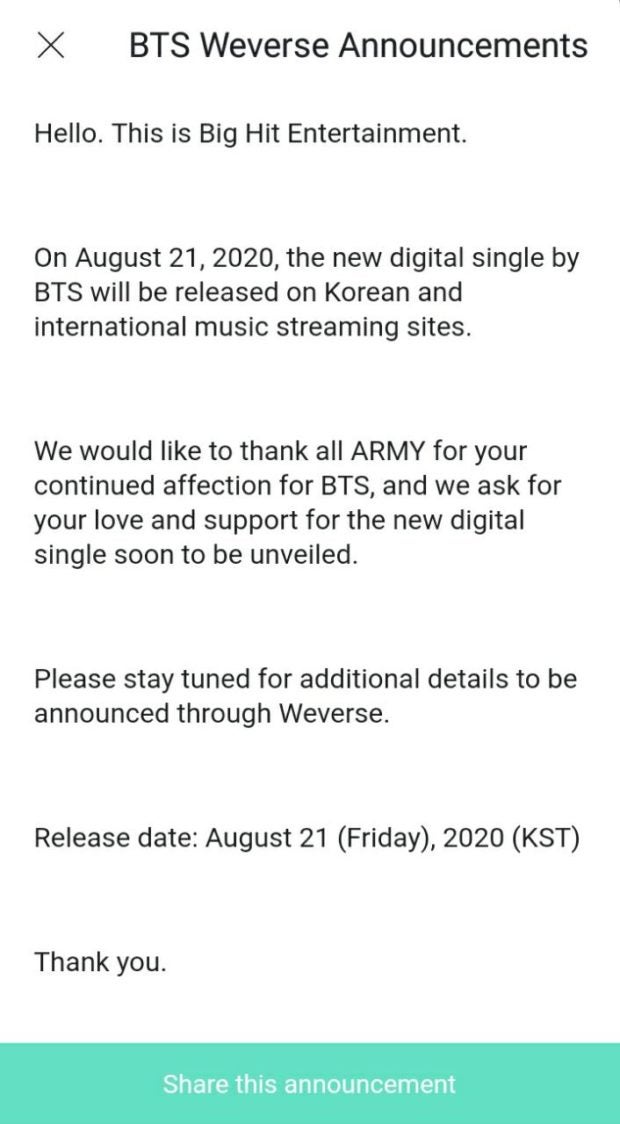 Further, the agency stated that additional details of BTS’ upcoming single will be announced soon on Weverse. JB

BTS and Usher to perform during the 2020 iHeartRadio Festival