GMA Kapuso actor Ruru Madrid recently earned much attention from his fans and non-fans alike, as well as co-stars when he took his stylish ensemble to the next level—he even caught the eye of South Korean pop superstar Kim Tae-hyung aka V of BTS.

A mirror selfie that Madrid posted on his Instagram account last July 14 freaked out netizens, especially the PH ARMY, or local fans of the popular K-pop music group BTS, as he bears a resemblance to V with his all-black OOTD (outfit of the day), which made him a trending topic on Twitter.

Netizens and even his co-GMA Artist Center talent Mikee Quintos commented on his post and said that at first glance, they thought it was Tae-hyung who posted a photo update. 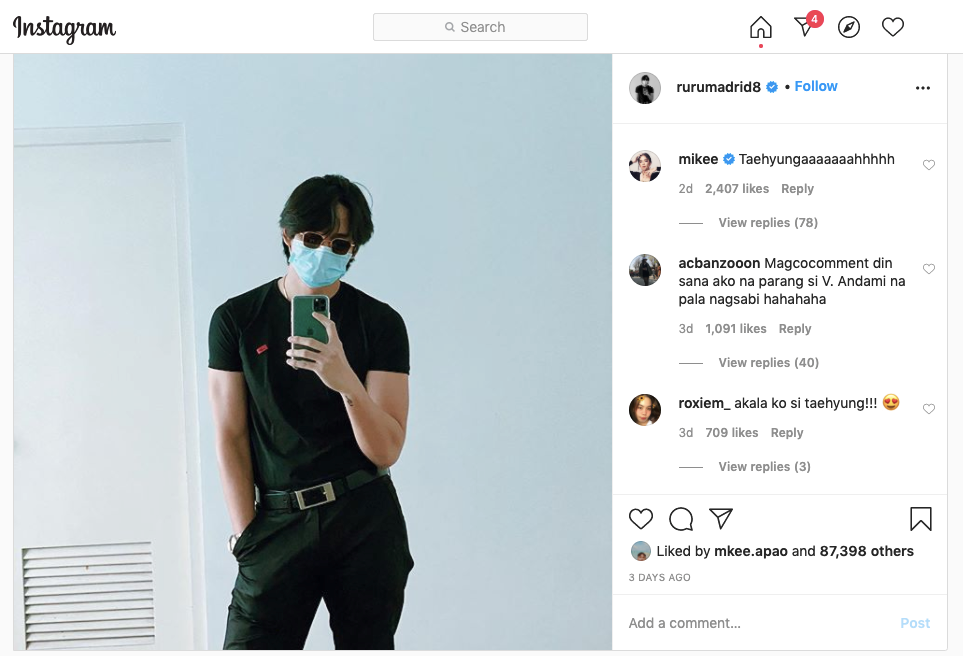 Shortly after his “mysterious” mirror selfie brought excitement online, Madrid could not help but bring more “kilig” (thrill) to fans as he posted another picture of him on his Twitter account wearing the same clothes and captioned it with one of BTS’ hit song “Boy with Luv” plus a tiger emoji.

Then again, the Kapuso actor’s new photo update hyped up fans who were quick to compare him to BTS’ V and replied to his tweet with photos screengrabbed from one of BANGTANTV’s YouTube video where V can be seen sporting almost the same clothing style as that of Madrid.

Twitter user @kthsexcy also tweeted photos of Ruru and V side by side.

Okay but this ruru with this taehyung 👀 pic.twitter.com/go4QeeCJh8

Meanwhile, one BTS fan from Turkey with account handle BenNuTellaN shared Ruru Madrid’s photo on Weverse, a Korean mobile application and web platform created by South Korean entertainment company Big Hit Entertainment and developed by beNX, which serves as an avenue for global fans to communicate better with their K-pop idols and get updated through their multimedia contents.

BTS’ V noticed Ruru Madrid’s photo uploaded by a fan on Weverse and left a comment on it. Image: screengrabbed from Weverse

Stunned by an unanticipated comment from a K-pop icon, Ruru shared on his Instagram Stories a screenshot of V’s Weverse comment and added a starstruck emoji on it. 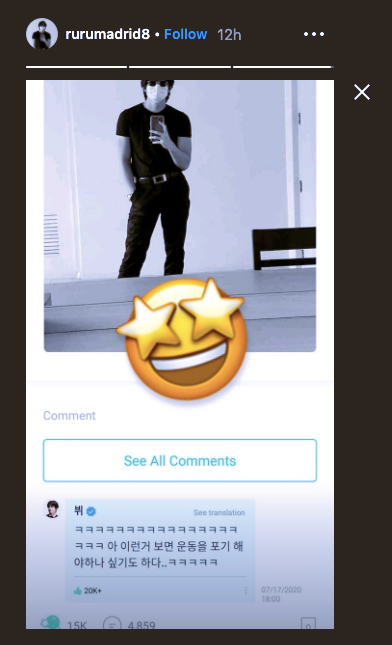 In a Twitter post on Thursday, July 16, Madrid also took the time to thank the netizens for showing him love and support on social media: “I would like to express my heartfelt gratitude to everyone who showed their love and support for me yesterday. It was unexpected! To be compared with an icon like Tae-hyung is such an honor that is why my heart is full until now (purple heart emojis).”

Of course, he also expressed gratitude to his Rurunatics family and to BTS’ ARMY in a separate tweet which reads, “To my Rurunatics family, thank you for making me feel loved and valued always. You never fail to make me smile all the time. To all ARMYs who showed support worldwide, thank you so much. I am with you as we celebrate love and success for BTS.”

Madrid also hopes for everyone’s safety at this time “when our unity and discipline are being tested.”

– Hope we all keep safe especially during these times when our unity and discipline are being tested.

Again, let's spread love and positivity. I love you Rurunatics and ARMYs! 💜 Borahae! 💜💜💜

Borahae is a Korean phrase, “I purple you,” coined by V, which has a special meaning in the BTS fandom. Before wrapping up their performance during a fan club event in November 2016, V explained to the ARMYs that the color purple was a hue of love—and as purple is the last color of the rainbow, it means “I will trust and love you for a long time.”

Since then, the ARMYs have been using the purple heart to express their love and support for BTS.  /ra