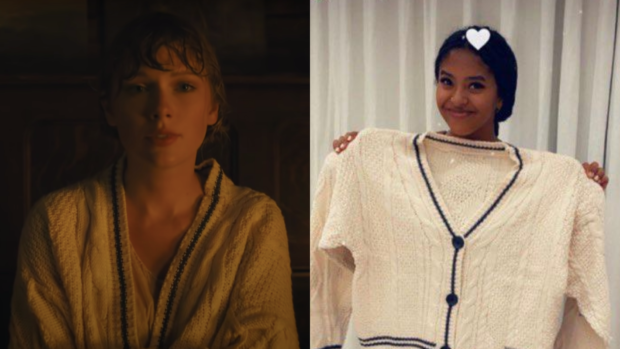 Taylor Swift sent Kobe Bryant’s daughter Natalia a cardigan identical to the one the singer wore in a music video for a song in her latest album “folklore”.

“Thank you SO much @taylorswift. I am OBSESSED with ‘folklore’!!!” Natalia said on her Instagram Stories last Saturday, July 25, alongside a photo of the piece of clothing.

A fan account (@SimplySFans) dedicated to Swift shared screenshots of Natalia’s post on Twitter on the same day. The page also posted a screengrab of the Instagram Story of Natalia’s mother, Vanessa, which showed her child holding the cardigan.

The over 4-minute clip shows Swift entering a piano in a long, sleeveless white dress and going through an adventure before returning to where she originally came from. Upon exiting the instrument, she sits down in front of it and pulls on the cream-colored cardigan as the song and video end.

The Bryant family are longtime fans of Swift, as per Metro yesterday, July 26. Natalia and her late sister Gianna met the singer backstage during her “Reputation” tour back in 2018.

The late basketball star Kobe also surprised Swift onstage while she was performing at the Staple Center in Los Angeles, United States in 2015, as seen in his old Instagram post.

Read Next
Dionne Monsanto to lawyer who body-shamed Angel Locsin: ‘Mura lang po salamin’
EDITORS' PICK
Over 3 Million worth of prizes to be won at Smart Padala’s SENDali Manalo Promo!
Comelec division junks petition to cancel Marcos COC for president
Acer starts the year off strong with the Aspire Vero National Geographic Edition
Marcos camp ‘extends hand of unity’ after COC cancellation bid is denied
The best of bayside and city living at SMDC’s Sail Residences
PH logs 37,070 more COVID-19 cases; over 33K others recover
MOST READ
NBI foils escape attempt of Kerwin Espinosa, two others
Comelec division junks petition to cancel Marcos COC for president
Francine Diaz’s manager denies actress is being courted by Seth Fedelin
‘Not my loss’: Did Kris Aquino just comment on her breakup with Mel Sarmiento?
Don't miss out on the latest news and information.