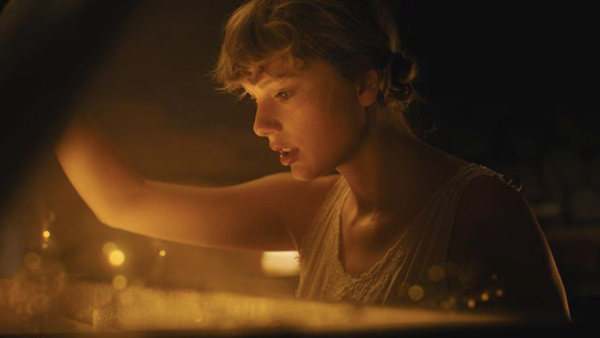 A secluded cabin, magic portals, a secret garden and a grand piano that floats on water—Taylor Swift transported her fans to another dimension through her new music video “cardigan,” a part of her eighth studio album “folklore.”

Swift surprised her fans yesterday by announcing that she would be releasing 16 fresh tracks at the stroke of midnight today, July 24. The pop singer gave her fans another treat by dropping the music video of her second track in the album on her YouTube channel on the same day.

“Cardigan” portrays a loss and a reclamation of self-worth as Swift skillfully transformed the everyday garment into a thing worthy of value.

“When I felt like I was an old cardigan / under someone’s bed / You put me on and said I was your favorite,” Swift sang.

The video, directed by the singer herself, shows Swift navigating through a magical yet challenging quest that ultimately leads her back to where she originally came from.

The singer also assured that her team followed COVID-19 protocols while filming the video.

“A special thank you to our on set medics, COVID-19 compliance personnel and the crew for operating under the strict guidelines including wearing PPE (personal protective equipment), practicing thorough sanitation and respecting social distancing during the video shoot,” Swift wrote at the end of the music video.

Swift said she wrote the entire “folklore” album during her isolation period amid the COVID-19 crisis. Much like what the album’s title suggests, Swift’s new song compilation appears to be exploring a more mellow theme and the folk genre. The singer also tapped the American folk band Bon Iver for collaboration in her track “exile.”

“Folklore” came less than a year after Swift released her upbeat album “Lover” in August 2019.  /ra

Read Next
Michael V reveals doctors saw condition that could lead to pneumonia
EDITORS' PICK
DOH: Too early to say COVID-19 cases are declining
Over 3 Million worth of prizes to be won at Smart Padala’s SENDali Manalo Promo!
Gov’t rolls out COVID-19 vaccination in select pharmacies on Jan. 20 to 21
COVID-19 cases in City of Manila are decreasing, says OCTA
The best of bayside and city living at SMDC’s Sail Residences
Acer starts the year off strong with the Aspire Vero National Geographic Edition
MOST READ
Comelec junks petition to scrap Bongbong Marcos COC
In Batanes, octogenarian dies of COVID-19
Marcos Jr. visits Cebu, stands as ‘ninong’ to mayor’s son
When to get boosters after positive COVID test
Don't miss out on the latest news and information.