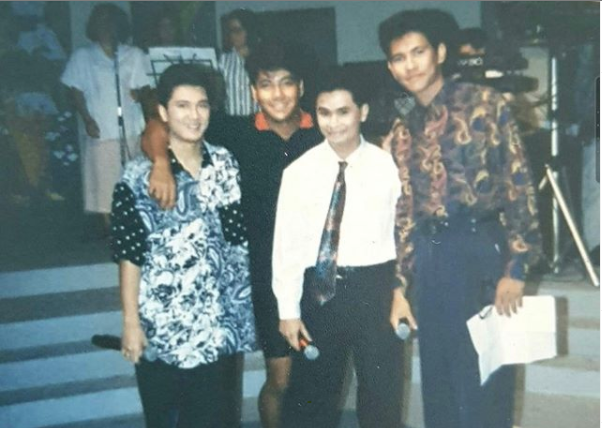 Singer-songwriter Ogie Alcasid treated fans with a dose of nostalgia by sharing a throwback photo of his first-ever television show that aired way back in 1991.

Alcasid was joined by fellow Filipino entertainment icons Janno Gibbs, Martin Nievera and Gary Valenciano in a photo which the singer posted on Instagram yesterday, July 8.

“I had my first tv show with my kumpare @jannolategibbs in 1991. The show was called ‘Small Brothers’ which was an offshoot of our music museum series with the same title,” Alcasid recalled.

“Direk @direkbert [Bert de Leon] conceptualized the show and it was [I] believe one of the early shows were the performances were all done live,” he added.

Alcasid noted that other than his and Gibbs’ idols Nievera and Valenciano, the photo also captured their then back up singers, actress Agot Isidro and her sisters Olive and Tina Isorena in the background, albeit being barely visible due to the lighting.

Alcasid in February also looked back on his first-ever single, “Peksman“, which he still has a vinyl record of. The song was released in 1989, just a few years before his TV debut on “Small Brothers”. JB