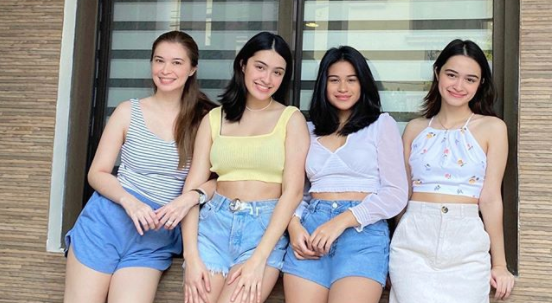 Actress Sunshine Cruz slammed sexual predators who were leaving “disgusting” comments about her and her three daughters on social media.

Cruz stands firm on her belief that women should not be blamed for their choice of clothing, she stated on her personal Facebook account yesterday, July 7. Incidentally, the “Love Thy Woman” star and her three daughters Angelina, Sam and Chesca Cruz previously took a dip in what appears to be an inflatable pool in their home, as seen on Cruz’s official Facebook page on June 28.

The actress then aired out her frustration about some Facebook users sexualizing her and her daughters on her personal account.

Cruz noted that they still get harassed even when they are fully covered.

“Never blame women rather blame yourself dahil kahit pinagaral kayo ng mga magulang mo, lumaki parin kayong bastos at manyak (because even though you were put to school by your parents, you still grew up indecent and perverted),” she stated.

The actress has also banned and blocked some of these sexual predators from her official page, as per her post yesterday.

(It is like you are seeing women for the first time. I am the one embarrassed for your parents.)

“You guys know who you are. I am saving those messages before banning you,” Cruz added. “You’ve been warned.”

The actress said that her lawyers and her management are also administrators of the page.

“THIS PAGE IS OPEN FOR PEOPLE WHO KNOW HOW TO RESPECT WOMEN. HINDI PARA SA MGA SEXUAL PREDATORS O MANYAK (Not for sexual predators and perverts),” she added. “If you have nothing good to say, keep it to yourself.”

The actress accompanied the post with a screengrab of a netizen’s comment comparing her daughters to pieces of bread being sold on a shelf without a price tag.

“Don’t blame us, blame people who look down on women for the choice of clothes they wear,” Cruz stressed.

Cruz was formerly married to fellow actor Ceasar Montano. She and Montano tied the knot in 2000 and were separated in 2013. The former couple shares three teenaged daughters namely Angelina Isabelle, Samantha Angeline and Angel Franchesca. Cruz previously hinted that Montano was supposedly not providing support for their children. JB