LOS ANGELES — Ringo Starr held an online 80th birthday bash Tuesday with a little help from his celebrity friends — and a number of classic Beatles songs — in aid of causes including Black Lives Matter. 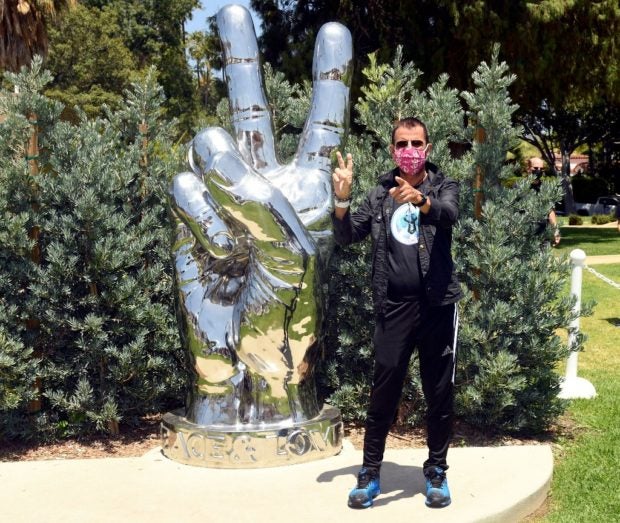 But fans hoping for a virtual reunion between Starr and fellow surviving Beatle Paul McCartney were left disappointed, as the celebration concluded with an archive clip of the pair performing “Helter Skelter.”

Normally Starr marks each passing year with live performances that include fellow musicians and hundreds of fans, but the pandemic forced a rethink this time.

“As most of you know, I’m fond of a good birthday party… but this is a bad year to host a get-together of any kind,” said the British musician, sitting behind a drum kit wearing a colorful face mask adorned with the peace sign.

“So I’m celebrating with my friends in a new way this year — we’re going to have to keep our distance due to the coronavirus.”

Famous pals from musicians Sheryl Crow and Kenny Loggins to filmmaker David Lynch recorded vocals and video tributes, as Starr introduced hits from the Beatles’ back catalog as well as his own.

“Come Together,” “All You Need is Love” and “With a Little Help From My Friends” were among the tracks aired in an eclectic mix of archive concert footage and home recordings watched live by some 130,000 fans.

At the end of the festivities, Starr announced “We’ve got Paul… and I’m even playing with him!” — before introducing footage of the pair shot in Starr’s adopted hometown Los Angeles last year.

But with McCartney seemingly billed in advance promotions as the show’s top guest, some Beatles fans took to social media to vent their disappointment.

“Where were you Paul? Very disappointing. #peaceandlove” wrote Chris Durso.

The duo still play together on occasion, including at the Dodger Stadium gig last year as part of McCartney’s “Freshen Up” tour.

Ben Harper, Dave Grohl and Sheila E. were among the celebrities who recorded musical segments for Starr’s online party.

The event encouraged donations to the Black Lives Matter Global Network for the fight to “end all this racist violence,” Starr explained, as well as The David Lynch Foundation, MusiCares and WaterAid.

Documentary footage reflected on the Beatles’ refusal to play before a segregated audience in Jacksonville, Florida during their famous 1964 US tour.

“Black Lives Matter. Stand up and make your voice heard,” said Starr, before noting the major influence of Black artists including Little Richard on the Beatles’ sound.

Ahead of the bash NASA’s Curiosity Rover tweeted Starr birthday wishes from space.

“Happy 80th, Ringo! Here’s my view of Earth (and Venus) from the surface of Mars where I’m thinking about your message of Peace and Love, and how in good times and in tough ones, we all get by with a little help from our friends,” it said.

Known for his easy-going personality and humor, Starr rocketed to global fame in the early 1960s and helped change the face of pop music forever as part of the Beatles — still perhaps the world’s most famous band.

After the group’s break-up, Starr emerged as a band leader in the late 1980s with his All Starr Band.

In an interview with Rolling Stone published Tuesday, the newly-minted octogenarian talked about his recent turn to health as he heads into his ninth decade.

Starr said he works out anywhere from three to six times a week, goes for long walks and maintains a vegetarian diet — eating “broccoli with everything and blueberries every morning.”

He said he hasn’t really left his Los Angeles home in some 11 weeks during the pandemic, inviting an engineer over just once for a jam session.

“I do a bit of that and I have a paint room, a little art room. And I’m going in there, painting and doing stuff. And I love to sit in the sun. I love LA. I love the brightness and hanging out.