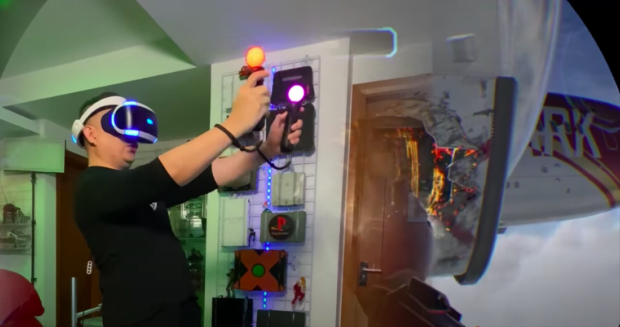 Multi-talented comedian Michael V. took on the demo of “Iron Man VR” (virtual reality) via his PlayStation 4 for a gaming session in his latest YouTube vlog.

Michael V., a known comic book fan, shared his Iron Man journey with fans by playing and talking about the superhero and VR technology in his “Bitoy Story” entry.

(If you like Iron Man, if you love games, if you are curious about VR or if you just want someone to talk to, you’ve come to the right place.)

An obviously ecstatic Michael V. could not contain his excitement over the game as he laughs and gasps in awe while flying around and shooting laser beams as Tony Stark.

The comedian also disclosed to fans that while he loves comic books, he was not really a fan of Iron Man prior to the casting of Robert Downey Jr. as the genius, billionaire, playboy and philanthropist hero of the Marvel Cinematic Universe in 2008.

Michael V. has been a fan since then and he actually met Iron Man himself back in 2018  for a red carpet event for the Marvel blockbuster “Avengers: Infinity War” in Singapore. He has also been featured in Downey’s carousel post from the event.

While staying true to his promise to upload vlogs weekly, the comedian-vlogger recently hit 700,000 subscribers on YouTube and has promised to give away seven items to his fans to celebrate the milestone.