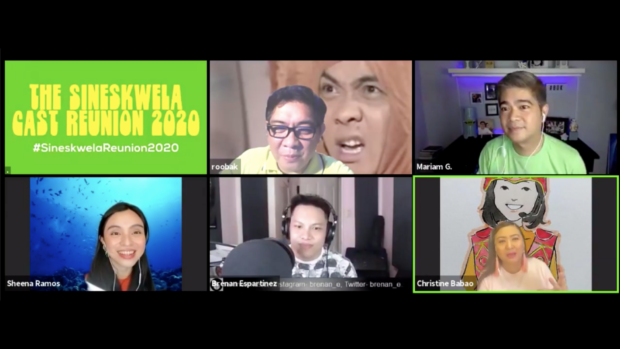 The cast of the 1990s educational TV show “Sineskwela” got together via a video call to catch up with each other and look back on some of their favorite times on the program.

“Sineskwela” explained science topics through animation and taught children how to apply science in their daily lives.

The reunion was organized by Icko Gonzalez who portrayed Kuya Bok. He also livestreamed the entire video conference on his Facebook page last Saturday, June 27.

Before catching up with each other, they first performed the show’s original theme song, which was composed by National Artist for Music Ryan Cayabyab.

Fans then looked for Maan Munsayac who played Kulitsap on the show. Gonzalez explained that she could not join them since she was busy working as a nurse in the United States amid the COVID-19 pandemic.

Bersola-Babao later recalled how the show was put together back in the 1990s. She stated that the program was started by the late Gina Lopez because she saw that Filipino kids were getting low grades in their science classes back then. The show was then produced with the goal to encourage young students to be interested in science and help them improve their grades.

Ramos and Espartinez also looked back on how taping would stop sometimes due to them crying on set. They laughed and said that they would get moody at times since they were still young and needed to balance their acting career with regular classes at school.

As the online reunion came to an end, the five cast members expressed their gratitude to their fans who consider the show a huge part of their childhoods. The program aired its first episode in 1994 and released its last one in 2004. JB