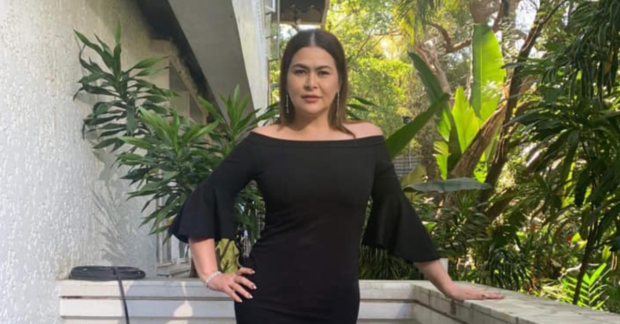 Aiko Melendez slammed a person who claimed that her son Andre Yllana had a sex-scandal video and who planned to release it.

The actress addressed the issue on the alleged video during a Facebook Live session on her page yesterday, June 22.  She explained that her sister in the United States had told her about one Twitter user (@jakolinks) who claimed that Andre had a sex video.

Melendez stated that the netizen planned on releasing Andre’s supposed scandal once his/her account gained 25,000 followers on the social media platform. The actress also said to her viewers that they could “lambast [her] all they want” but warned them not to target her kids.

“When it comes to my children, ako ang makakalaban ninyo (you will be facing me),” she added.

Melendez stressed that the person’s claim smeared the name of Andre, whom she said she raised mostly on her own. She then questioned how one could think of tarnishing another person’s reputation in the midst of the ongoing COVID-19 pandemic.

Addressing the netizen, Melendez stated that he/she does not have “the right to destroy and ruin” Andre’s reputation.

The actress also insisted that her son has done nothing wrong to deserve this, pointing out that Andre left show biz since he was not fond of being in the limelight.

Following Melendez’s statements, Andre later joined her in the livestream to speak on the alleged scandal. Andre explained that the Instagram account the person is showing to insist his/her claim is true has not been under Andre’s control since 2017.

Andre also laughed at the issue, adding that he would never think of doing a sex video. Echoing his mom’s dare, he challenged the netizen to release the supposed scandal as well.

As they ended their livestream, the mother and son urged others to be cautious of what they post online and to “think before you click.” Moments after, Aiko revealed that the netizen has since changed his/her handle on Twitter to @MadameLayla01.

“And infairness ah 5k followers! Maghanda ka na… [Di pa] tayo tapos (Be prepared… We are not yet done)!!!! I have a big surprise for you!” she said alongside a screenshot of the netizen’s page. “A surprise that you will never forget for the rest of your life. You mess with my kids! Now you are very wrong because you are now messing with me!”

And he kept changing and changing his account! And infairness ah 5k followers! Maghanda ka na… Dipa tayo tapos!!!! I…

“And [I] will make sure [I] will teach you a lesson that you will regret ever learning!” she stated.

Andre is Melendez’s child with her former husband Jomari Yllana, whom she was married to for three years.  /ra

Aiko Melendez rushed to hospital after vomiting on set