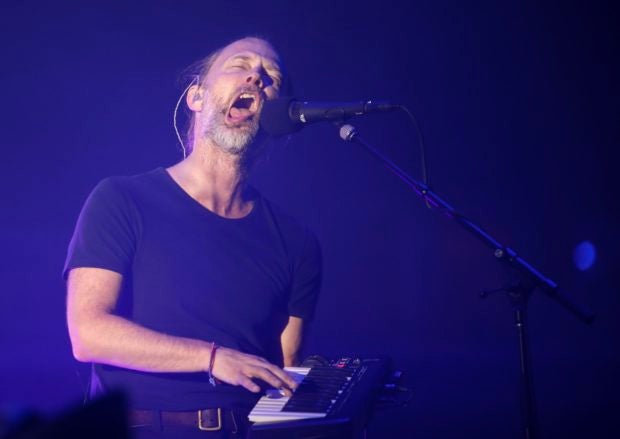 Radiohead has released a variety of classic live concerts on their YouTube channel amid the coronavirus pandemic. Image: AFP/Kamil Krzaczynski

Although World Music Day is planned as usual on June 21, the coronavirus pandemic has wiped hundreds of music festivals and concerts off our summer calendar. A number of artists and musical institutions have delved into their archives to share some musical joy during these difficult times. Here is a selection of four concerts to catch from home.

Radiohead – Live at the Astoria

While drummer Philip Selway announced in February that the band was taking “a year away” from the recording studio, the veteran rockers have released a number of classic live concerts on their YouTube channel to keep fans entertained.

Among them is their concert from May 27, 1994, at the now-defunct Astoria in London, where Thom Yorke and his bandmates performed classic hits such as “Creep”, “Fake Plastic Trees” and “Just”.

The iconic show notably marked the first time that Radiohead played early versions of classics from their sophomore album, “The Bends”, including “Black Star”, “My Iron Lung” and “Street Spirit (Fade Out)”.

Radiohead released “Live at the Astoria” on VHS in March 1995, coinciding with the release of the critically acclaimed follow-up to their 1993 debut “Pablo Honey”.

Jazz at Lincoln Center – Worldwide Concert for Our Culture

The New York arts organization has presented its annual spring gala in the digital realm, in an effort to comply with social-distancing guidelines.

“Worldwide Concert for Our Culture” features musical performances by some of the biggest names in jazz, such as Baqir Abbas, Chano Dominguez, Chucho Valdés, Dianne Reeves, Hamilton de Holanda and Igor Butman, as well as Cécile McLorin Salvant and Sullivan Fortner.

Makoto Ozone, Nduduzo Makhathini, Richard Galliano, Stefano DiBattista and WDR Big Band have also contributed remotely to the special concert, during which they have all played classics that made them fall in love with jazz.

While “Worldwide Concert for Our Culture” was released in April on the YouTube channel of Jazz at Lincoln Center, music enthusiasts are still encouraged to donate to the organization’s jazz program.

The National – Live from Primavera Sound

While their summer tour has been postponed in reaction to the coronavirus pandemic, the Cincinnati rockers have shared their full performance for the 2018 edition of Primavera Sound.

Throughout the concert, Matt Berninger and his bandmates played fan favorites from their catalog, such as “Nobody Else Will Be There”, “Day I Die”, “Don’t Swallow the Cap” and “Graceless”.

The National has also dedicated the “Cherry Tree” cut, “About Time”, to the late Scottish singer-songwriter Scott Hutchinson, who passed away a month before the 2018 edition of Primavera Sound.

Aside from releasing their full performance, the National turned to their fans to raise funds for their touring crew amid the coronavirus pandemic.

“Our crew are the lifeblood of our touring operation and have become family through the many years we’ve worked together. As uncertainty looms over the state of the live concert industry, we will direct all profits from merch sales through our webstore, new Cherry Tree enrollments, and sales from the Cherry Tree members-only store to support our crew members throughout this crisis to the best of our ability,” they said in a statement.

While music venues are still closed indefinitely in reaction to the pandemic, Third Man Records has opened the doors of its famed Blue Room in Nashville, Tennessee for a series of exclusive musical performances.

“Third Man Records has always believed that great things come out of restrictions. Artists being restricted from their audiences though? We’re not sure what greatness can come from that. Third Man has a big empty blue room, cameras, internet access, and TONS of talented friends and family who are out of work, so they’re putting this all to use starting today,” Jack White’s label teased in a statement.