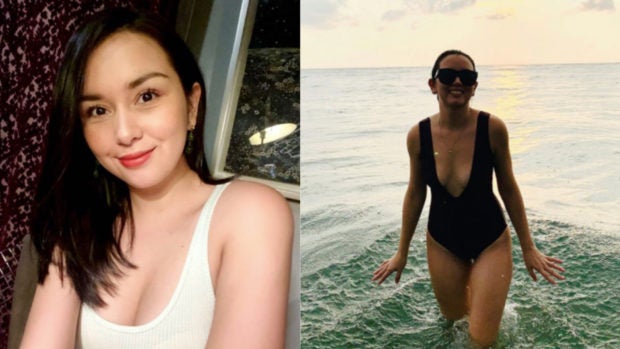 Actress Beauty Gonzalez got stung by a jellyfish while she was at the beach, and instead of using pee as a first-aid treatment, she used “good old fashioned” vinegar from the Ilocos.

Gonzalez showed her fun time at the beach “seconds before my jellyfish attack” via Instagram last Thursday, June 18. The actress flaunted her fit figure while donning a black swimsuit.

“Them critters obviously didn’t get the social distancing memo,” she said. “No, nobody pee’d on my leg, [I used] good old fashioned Sukang Iloko to first aid the stings. Very effective.”

Gonzalez also joked that the next time she orders Chinese food, it will be a jellyfish dish.

“Akin ang huling Halakhak (I will have the last laugh)!” the actress said.

Seconds before my Jellyfish attack, Them critters obviously didn’t get the social distancing memo. No, nobody pee’d on my leg, Used good old fashioned Sukang Iloko to first aid the stings. Very effective. Now to deal with the ‘scars’ . Next time i eat Chinese food, I’m ordering Jellyfish. Akin ang huling Halakhak!!!

Despite movies’ and TV shows’ depiction of urine as a treatment for a jellyfish sting, Scientific American stated in a 2007 article that this treatment is a myth. Pee could actually aggravate the jellyfish’s stings into releasing even more venom. According to the science magazine, the sting could be assuaged using vinegar or 5% acetic acid.

Gonzalez was one of the stars of the hit TV drama series “Kadenang Ginto,” which also starred Dimples Romana, Albert Martinez and Andrea Brillantes, among others.  /ra

Dimples Romana marks 17th anniversary with husband: ‘My heart will forever beat for you’