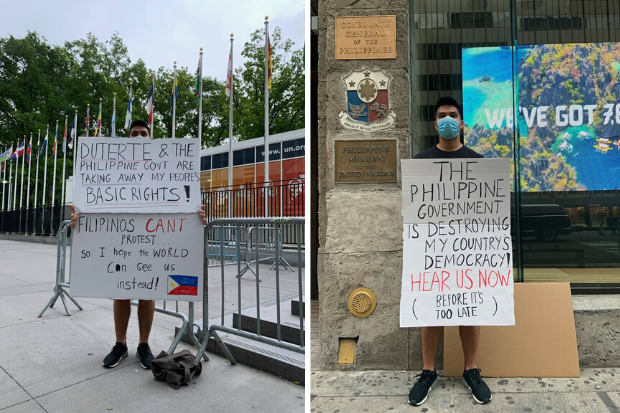 Enzo Manzano, son of veteran actor Edu Manzano, decided to hold solo protests in New York to raise awareness on how “the Philippine government keeps coming up with ways to silence us back home.”

“Today, I chose to stand outside the United Nations HQ for [three] hours,” he said in a Facebook post yesterday, June 18. “It took me three days to decide I was actually going to do this.”

“How did I arrive at this decision? I realized lengthy Facebook posts don’t do the trick… ALSO […] It only makes me more angry whenever news of our government comes out in the Philippines,” Manzano stressed.

He bore a sign that read “DUTERTE & THE PHILIPPINE GOV’T ARE TAKING AWAY MY PEOPLE’S BASIC RIGHTS! FILIPINOS CAN’T PROTEST… so I hope the WORLD can see us instead!” as seen on a Facebook Live stream of the protest.

Today, I chose to stand outside the United Nations HQ for 3 hours (I have a recorded live video, on my timeline, showing…

Manzano noted that while he “wasn’t the type to protest,” he deemed it necessary because “at this point with all that the Philippine government is doing, it’s either you’re fighting to keep your country alive or not.”

“Sucks to hear that my fellow Filipinos can’t protest back home.. I hope my lone protest can make up for that. At least a little bit,” he added.

Manzano’s act comes as Filipinos back home protest online and on the streets, specifically during the recent celebration of Independence Day on June 12 despite authorities’ warnings, to call for the scrapping of the controversial anti-terrorism bill.

The said bill has been widely debated, with several groups, celebrities and lawmakers criticizing it for its supposed breach of freedom and human rights.

Several congressmen have, meanwhile, withdrawn their authorship from the said bill, which now only awaits President Rodrigo Duterte’s signature to be passed into law.

Manzano today, June 20, held another protest, bearing several signs in front of the Consulate General of the Philippines, also in New York.

“Thank you for all the kind words! I’ve already mentioned this before and I am grateful for all the support too, but this isn’t just for me. I am doing this for each and every one of you,” he stressed.

“It hurts to be away from our country and to see this happen. Things have dramatically changed since I’ve left and it’s only been 2 1/2 years so far. I can’t stand the thought of what our home is turning into,” Manzano added.

He expressed hopes that his protests would become “loud enough for the world to see and hear” despite the “multiple efforts to silence and scare” protesters.

Second day of protesting. This time, it was in front of the Consulate General of the Philippines. Thank you for all…

On Manzano’s second day of protesting, he held up a sign that read: “THE PHILIPPINE GOVERNMENT IS DESTROYING MY COUNTRY’S DEMOCRACY! HEAR US NOW (BEFORE IT’S TOO LATE).”

“TO FILIPINOS OVERSEAS: WE MAY HAVE LEFT OUR COUNTRY… BUT LET’S NOT ABANDON OUR PEOPLE,” he emphasized in another sign.  /ra