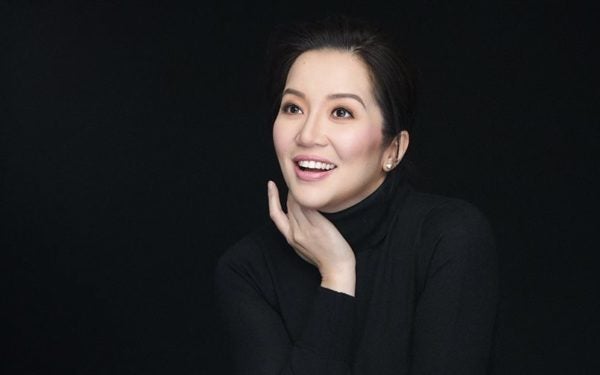 Kris Aquino gave a peek into some of her plans as fans called for her showbiz comeback.

Comments requesting her to return to television came after she posted a video greeting via Instagram on Tuesday, June 9, for Darla Sauler, the former head writer of her now-defunct show “Kris TV.”

Instagram user @badgalbilly asked Aquino if she was going to make a comeback.

Aquino replied, “I still need a medical clearance because of my autoimmune issues — I’m leaving everything as part of God’s plans for my life.”

“My other path is to take an online course (since many are now available) — political science — sometimes you also have to follow the call of destiny.”

Aquino explained that she wanted to get an education to be more informed.

“Oops I should have clarified — my dad started as a war correspondent for the Manila Times. Every morning [I] watch Chris Cuomo on CNN [and] he comes from a political clan… [and] he has a law degree — so he’s able to tackle political issues from many perspectives.

“I don’t want to have an opinion because of my DNA, [I] want to be thoroughly informed [and] very [well-rounded] from my education,” she reasoned, adding, “There’s a part of me that want to be a content creator of documentaries that [I] myself hosted [and] produced.” 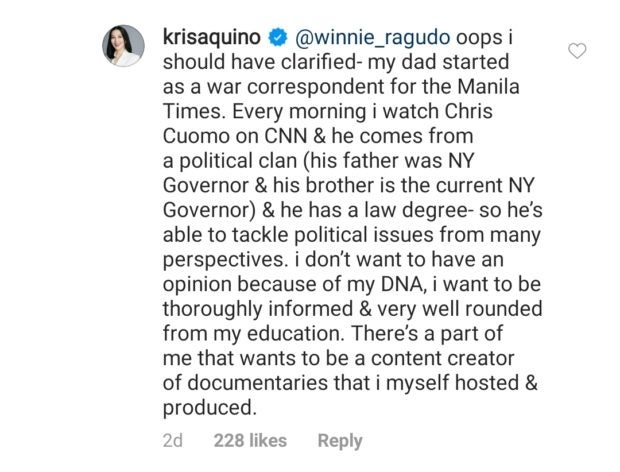 Aquino said back in 2018 that she could not return to ABS-CBN, her network for about 20 years, due to politics.

“Its franchise is at stake,” she explained, stating that “while I have no issues with President Duterte, his supporters don’t like me. I know the realities of life. I understand why I still don’t have [TV projects] up to now.”

ABS-CBN’s franchise expired this year and with no renewal, was ordered shut down by the National Telecommunications Commission.

In the meantime, Aquino has kept a presence online with vlogs on platforms such as YouTube and Facebook, and interacts with fans on social media. /ra

Read Next
Jinkee Pacquiao giving away P100,000 to celebrate YouTube subscribers
EDITORS' PICK
Acer starts the year off strong with the Aspire Vero National Geographic Edition
Gear up and get ready to play with Yamaha Mio Gear
Over 3 Million worth of prizes to be won at Smart Padala’s SENDali Manalo Promo!
Metro Manila posts lowest temperature yet this ‘amihan’ season at 19°C
DOH: 28,471 new COVID-19 cases in PH; active cases now 284,458
On Day 2 of implementation, gov’t says workers now exempt from ‘no vax, no ride’ policy
MOST READ
Cold-case investigation names surprise suspect in Anne Frank’s betrayal
Emma Stone calls Andrew Garfield a ‘jerk’ after he ‘lied’ about his ‘Spider-Man: No Way Home’ appearance
Derek Ramsay on being married to Ellen Adarna: ‘Gumaan ‘yung mundo ko’
Czech anti-vax singer dies after deliberate infection
Follow @NGunoINQ on Twitter
Don't miss out on the latest news and information.