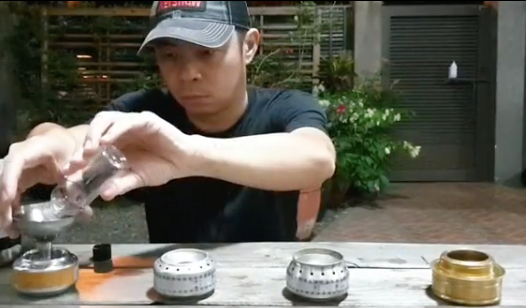 Parokya ni Edgar frontman Chito Miranda, who admittedly had a lot of free time amid the quarantine, has picked up a new hobby with alcohol stoves.

Miranda’s “obsession” pushed him to make his own stoves and he is now treating fans with a head-to-head battle between his creations and a factory-made alcohol stove he got online.

“Naghanap at gumawa kasi ako ng mga alternative ways upang makapag luto at makapag pakulo ng tubig nung nag-lockdown bigla (It is because I looked at and created some alternative ways to cook food or boil water when the lockdown was suddenly imposed),” he added.

“I just wanted to make sure na prepared ako if ever mawalan kami ng gas for cooking, or even clean drinking water. So ayun… I became fascinated with it. Wala lang… nakakatuwa lang hehe!” the musician explained.

(I just wanted to make sure that I am prepared if we ever run out of gas for cooking, or even clean drinking water. So, I became fascinated with it. It is nothing, really, I just find it fun!)

(Anyway, I just wanted to try out how homemade alcohol stoves will fare against a factory-made one I bought online. I was shocked by the results… as in, I said: Whaaat?! Shocking!)

The rock and roll star’s post came with photos of the stoves, complete with description, and a video of the battle for which stove’s fire will burn the longest. Each alcohol stove was filled with 60 milliliters of denatured alcohol.

The factory-made alcohol stove ultimately won the contest with 25 minutes and 2 seconds, winning by just over 5 minutes against Miranda’s best bet.

The singer also taught fans how to make their own alcohol stoves out of old soda cans on May 22, through a YouTube video.

He demonstrated the stove’s effectiveness by using one to cook instant Japanese ramen. JB