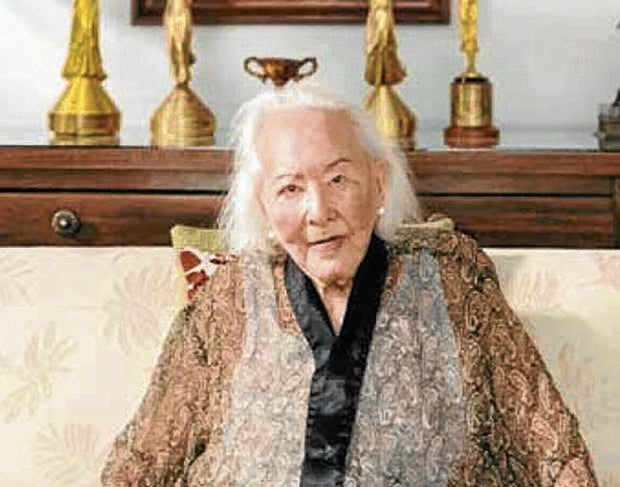 MANILA, Philippines — The country’s entertainment industry lost one of its most enduring and endearing icons on Wednesday with the death of Anita Linda, the oldest Filipino actress to remain active in show biz, at the age of 95.

Making her screen debut in a movie that premiered during the Japanese occupation, Linda—best known to contemporary audiences for her mother or grandmother roles—saw how local filmmaking developed and evolved. As Adolfo Alix Jr., the last director to work with her, put it: “She was the only actress to experience the three golden ages of Philippine cinema.’’

“She was able to work with all the great directors of the past, like Gerry de Leon, Lino Brocka, Ishmael Bernal, Joey Gosiengfiao, and then with Mike de Leon,’’ Alix said. ‘’She was the favorite of everyone.’’

Another award-winning filmmaker, Brillante Mendoza, described Linda as a screen legend who “had lived a full life. If she could, she’d tell us that she had already accomplished her mission.’’

She was discovered as a talent by the late National Artist for Film Lamberto Avellana while watching a stage show at Avenue Theater in Manila. Avellana gave her the screen name Anita Linda and cast her in “Tia Juana,” her first film under LVN Pictures. Shot before World War II reached the country, the movie was finally shown in 1943, at the height of the Japanese occupation.

After the war, in 1947, she resumed acting under Premiere Productions, appearing in Avellana’s “Sekretang Hong Kong” with the comedic duo Pugo and Togo. She bagged her first leading role that year in “Alyas Sakim,” with costar Leopoldo Salcedo.

Linda’s uninterrupted career saw her being paired with a host of fellow icons, including the late Fernando Poe Jr. and Dolphy. At 74, she became the oldest actress to win a Famas Award, as best supporting actress in Mario O’Hara’s “Ang Babae sa Bubungang Lata” (1998).

Brillante Mendoza first worked with Linda in “Takaw Tukso” in 1986, and again in 2009 in “Lola,” which won her the best actress trophy in the 2010 Asia-Pacific Film Festival.Mendoza and Linda last worked together in 2012 for “Captive,” which also featured French actress Isabelle Huppert.

Linda was already an octogenarian when she first worked with Alix in “Tambolista” (2007) and in “Adela” (2009). The second film earned her best actress honors in the 10th Cinemanila International Film Festival at age 83. They would do their third project together, “Presa,” in 2011. In “Circa” (2019), their last collaboration, Linda played mother to the characters of Gina Alajar, Laurice Guillen and Jaclyn Jose.

The veteran actress had complained of difficulty in breathing prior to her death on Wednesday morning at her Las Piñas City residence, according to her daughter Francesca Legazpi.

Her remains were cremated later that day at Manila Memorial Park in Parañaque.

Linda is also survived by her son Fred, who is based in the United States.