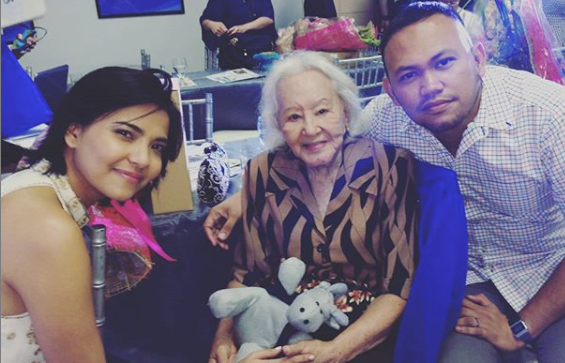 Actress Alessandra de Rossi grieves the death of veteran actress Anita Linda who died today, June 10, at the age of 95.

De Rossi recalled some of her best moments with Linda when taping and shared why she considers the veteran star her “classmate.” The 35-year-old actress also revealed Linda’s last words to her, on her Instagram post today.

“I call her Anita, my classmate, joke ko lagi sa kanya na [BFF] na kami nung elementary, sadyang magaling lang ang doktor ko at [siya] ay laging puyat,” de Rossi said. (I always joke with her about how she was my best friend forever [BFF] when we were in elementary, but my doctor just so happens to be great, while she was always staying up late.)

De Rossi disclosed that there was never a dull moment when she was with Linda. Although the shooting might be tiring, de Rossi and the rest of the crew were happy whenever Linda was around. The “Kita Kita” star also reminisced on how it was a “riot” when Linda used to wear her red lipstick.

FEATURED STORIES
ENTERTAINMENT
Actress no longer the entitled brat she used to be
ENTERTAINMENT
LOOK: Cherry Pie Picache, Edu Manzano go sailing together in Florida
ENTERTAINMENT
Another Coco Martin in the making

“Kaya pag nagkita kami, she’ll say, ‘naglipstick akong red, classmate, dahil alam kong lolokohin mo na naman ako!’ and tama [siya],” de Rossi recalled. (When we meet, she would say, “I wore my red lipstick, classmate, because I know you are going to poke fun at me again!” and she was right.)

Linda also imparted wisdom to de Rossi before her passing. De Rossi recalled the last words of her “classmate” to her.

“[Never] lose your sunshine, you never fail to make us happy just by being who you are,” Linda said. “That is rare.”

(Anita, it is hard to be happy during these times. It is dark, but your laughter and your beautiful words will be my eternal sunshine. You raised me up today.)

Director Adolfo Alix Jr. is also mourning Linda’s death. The veteran actress passed away at 6:15 a.m. today, as per his Instagram post. He also expressed his condolences to her family and children.

“This is a very sad day for me,” Alix said. “I am trembling as I am gathering my thoughts.”

Linda’s daughter, Francesca Legaspi, has confirmed her mother’s passing in earlier reports. The cause of Linda’s death was not disclosed.