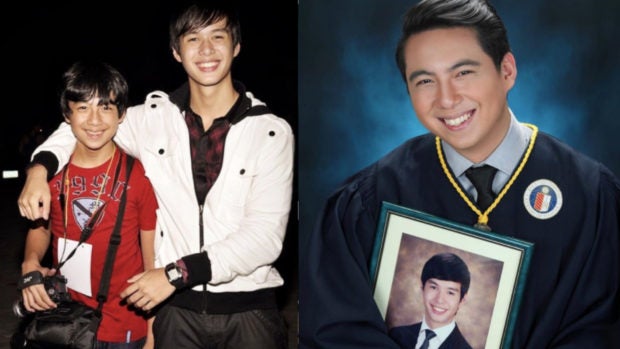 Nine years after AJ Perez passed away due to a vehicular accident, the actor’s brother remembered him through a heartfelt tribute.

Holding on to the actor’s portrait while posing for his graduation shoot, Perez’s brother Angello said that ever since AJ passed away, he has made it a point to dedicate all his accomplishments to his older brother. AJ’s brother shared the message to his followers via his Instagram page yesterday, April 17.

Angello will graduate from the Ateneo de Manila University with a BS Psychology degree.

“You would have been a college graduate by now,” Angello said. “This year, I’d like to believe that we are graduating together and I will be thinking of you when I receive that diploma.”

“Thank you for always being my inspiration,” he added.

On the evening of April 16, 2011, AJ was on his way home to Manila after doing a show in Pangasinan when his vehicle collided with a bus in Tarlac. AJ and his five other companions, including his father Gerardo, were in the vehicle. The actor was pronounced dead shortly after midnight the next day, April 17. He was the only fatality in the accident. He was 18 years old.

Angello and his family have also been consistently remembering AJ on every important occasion.

On AJ’s birthday on Feb. 17, the actor’s brother did not forget to greet his “kuya” (older brother) by showing a throwback photo of them together.

“You never failed to make me smile, even on the bad days,” Angello said. “Missing you a little more today. Happy birthday kuya.”

Last Christmas, the Perez family also celebrated the holiday together, never forgetting to include AJ even in their family picture in front of the Christmas tree.

The teen actor was best known for his role in the TV drama show “Sabel” with actress Jessy Mendiola.  /ra

Bernard Palanca remembers brother Miko Palanca: ‘I miss you so much, you rest now’