Former beauty queen Janina San Miguel spoke up on the truth behind relinquishing her crown in 2008, when she was the title holder for Binibining Pilipinas-World.

San Miguel revealed the grimmer side to her experiences in the pageant world, such as indecent proposals and the controlling manner of her training in a video interview with Channel News Asia’s “Undercover Asia” released in April.

At 17, San Miguel competed in Binibining Pilipinas in 2008. She went viral with her response about her family in the Q&A portion. Despite fumbling in English, she went on to take home the crown to represent the country in Miss World. 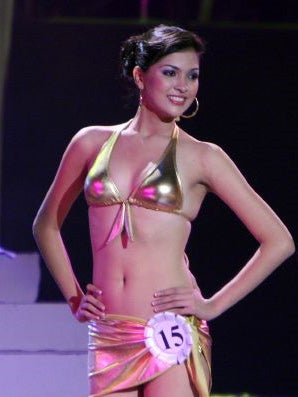 She returned the crown nearly three months before she would join Miss World, citing personal reasons like the death of her grandfather.

Now a call center agent, she said she wished she never joined the pageant. “I’m really not happy during that time,” she remarked.

(When we were there already, we were told P3 million for a one-night stand. For P25 million, you will be his girlfriend, you will be given a car, condo, resort, everything. Those were their dirty practices. There are so many who want a beauty queen for a wife or girlfriend.)

She looked back too on how she was controlled during her training period. Gadgets to contact anyone were withheld and she could not see her family. She was made to watch only pageant videos to study how beauty queens won.

In one instance, even if her father and brother were outside the venue where she stayed, they were sent away by the guard. She also learned that her grandfather was seriously ill by accident—those training her did not want to disclose the information to avoid distraction.

San Miguel has turned her back on pageants and show business and is a wife and mom. “Much important ‘yung family ko, rather than wealth and fame,” she said. “Ang gulo-gulo ng show business. Andaming indecent proposal din.”

(My family is much [more] important, rather than wealth and fame. Show business is so messy. There are so many indecent proposals too.) Niña V. Guno  /ra

Read Next
Lav Diaz’s 8-hour epic ‘Hele Sa Hiwagang Hapis’ to stream on YouTube
EDITORS' PICK
Geek out at TOYCON 2022 powered by Smart Signature
UK’s Boris Johnson will resign, BBC reports
High-risk pregnancy: Reducing your risk is in your hands
House energy committee chair Arroyo bats for cheap electricity
High inflation: Your P1 is now worth only 87 centavos
Unemployment rate up to 6% in May
MOST READ
Suspect in grisly killing of missing woman in Bulacan arrested
Hong Kong suspends flight bans as it eases COVID-19 rules
Kim Atienza’s daughter flaunts bikini body in response to critics of her ‘revealing photos’
Cop slain in Isabela ambush
Don't miss out on the latest news and information.