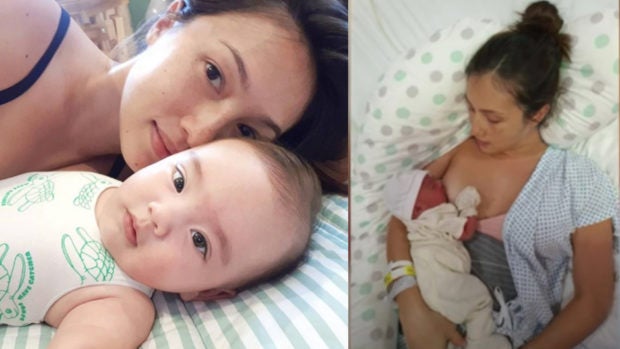 Actress and first-time mom Solenn Heussaff narrated her breastfeeding journey to impart some of the things she learned, based on research and experience.

Heussaff, mother of 4-month-old baby Thylane, revealed that she has difficulties producing milk, through her YouTube vlog yesterday, May 27.

The actress is married to Argentinian businessman Nico Bolzico. The couple welcomed their first baby Thylane Katana Bolzico on Jan. 1.

“After Thylane was born via CS (cesarean section,) we spent some time in the hospital and as early as then, I kind of figured I wasn’t going to be one of those moms who would be lucky when it came to breastfeeding,” Heussaff stated in her vlog’s notes.

Heussaff recounted in her video how Thylane was losing “too much weight” after she was born. Since the actress could not produce enough milk for her baby, her friends donated their breastmilk.

To address her breastfeeding difficulties, Heussaff consulted four lactation specialists and did her own research. Before Heussaff began listing down her tips, the actress stressed that “every mom is different” and that the methods she used were those that are most effective for her and her baby. The actress added that moms should still consult their doctors.

Heussaff said these tips are things she still does at home, since until now, she is still struggling with breastfeeding.

The baby needs to latch on the mother’s breast as much as possible. According to Heussaff, this prompts the mom’s body, signaling that it needs to produce more milk.

Heussaff also said moms should try not to get stressed out during this process because it might increase their difficulty in producing milk.

Heussaff recommended using breast pumps or manually pumping their breasts to hasten the process of getting milk.

Moms should pump right after the baby latches, according to the actress, or at least every two hours if the baby is not latching.

Heussaff emphasized eating well and getting the right type of nutrition. Breastfeeding moms need to eat “a lot of starchy food” such as potatoes, sweet potatoes and malunggay.

Heussaff demonstrated a few massage techniques that moms could try to help with their milk production. She also advised moms to place hot compress on top of their chests for five minutes at least three times a day, to help with milk circulation.

The actress-artist also gave some breastfeeding-friendly recipes: a breastfeeding milk tea mix and a golden milk drink made from turmeric powder, soy milk and other ingredients.

She listed all the ingredients for these drinks and how to make them in her blog.

“My experience with breastfeeding can be totally different from yours, but we can all learn from each other—without having to compare,” Heussaff said in her website.

Heussaff realized that “breastfeeding is fulfilling, but it is also so painful.”

“I’m realizing motherhood is like this constant back and forth between bliss and self-doubt,” she said. “And I guess I’m just sharing my experience, because I want you to know that you aren’t alone in your journey.”

“If you’re purely breastfeeding, if you are mixed feeding or you are formula feeding — you do you,” Heussaff advised her fellow moms in the video. “Don’t let anyone judge you. At the end of the day, as long as you and your baby are healthy, that’s the important thing.” JB

Read Next
‘Terrace House’ season canceled after death of cast member Hana Kimura
EDITORS' PICK
Smart 5G goes live
PNP: Checkpoints back in MECQ areas
BREAKING: 3,226 latest COVID-19 cases bring PH’s total to 106,330
Been there, done that but what’s the difference between MECQ and GCQ?
Water remains our saving grace right now
A gem of a residence in the new normal
MOST READ
MECQ guidelines in infographics
MECQ in NCR, other areas: Mass transportation suspended, quarantine pass required anew
Duterte heeds frontliners’ plea, reimposes MECQ in Metro Manila, other areas Aug. 4 -18
Doctors group to Duterte: ‘There was never a call for a revolt’
Don't miss out on the latest news and information.