Lady Gaga and Ariana Grande in their promotional video for “Rain on Me”. Image: Instagram/@arianagrande

Ariana Grande’s rumored new boyfriend made a cameo in a pseudo weather report to promote “Rain on Me”, the pop star’s new song with Lady Gaga.

Gaga and Grande transformed into weather girls for The Weather Channel to “celebrate the rain,” as seen on Grande’s Instagram post today, May 27.

Gaga dropped her collaboration with Grande last Friday, May 22, which was followed by the song’s music video premiere the next day, May 23. The song is a part of Gaga’s upcoming album “Chromatica”.

The two pop singers held blue umbrellas while it appeared to “rain” in their location in California, United States. The man pouring water over Grande was identified as Dalton Gomez, her supposed new romance, as per E! yesterday, May 26.

Gaga dressed in an elaborate white fitted dress paired with bedazzled pink sunglasses and long pink hair for the video, while Grande sported her signature high ponytail with a brown checkered dress.

The hilarious promo also included Gaga and Grande quoting some of the song’s lyrics such as “rain on me, tsunami.”

“The world is rising up in a massive act of kindness to celebrate the rain the world so desperately needs to quench the thirst of the earth,” Gaga said. “Are we thirsty or what?”

Besides his cameo in the video promo, Gomez was also featured in behind-the-scenes moments on Grande’s Instagram Stories today. 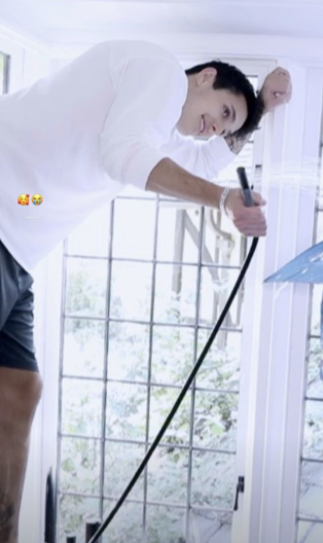 According to the E! report, Grande and Gomez “run in the same circle” and have been spending a lot of time together since last March. The two have been quarantining together during the coronavirus pandemic.

Grande apparently does not want another public relationship and chooses to keep her love life private, a source told People yesterday.

The singer first showed a glimpse of Gomez for her collaboration with Justin Bieber “Stuck with U”. The song’s music video includes several couples while in quarantine, including Bieber with his wife Hailey Baldwin, Ashton Kutcher and Mila Kunis and more.

By the end of the music video, Grande danced in a bedroom with her mystery man wearing a black hoodie, who is now identified as Gomez. Cha Lino/NVG