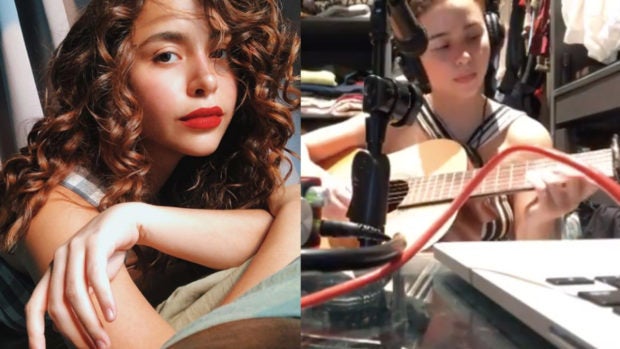 Actress Yassi Pressman revealed that she is honing a new skill during this quarantine period.

Pressman showed her ninth day of online guitar lessons via her Instagram account yesterday, May 22. The “Ang Probinsyano” star practiced several chord progressions in her guitar during the online class.

As a product of her lessons, Pressman was able to sing an original song. The actress dedicated it to her ABS-CBN family amid the TV network’s shutdown issue, as seen in her Instagram post last Wednesday, May 20.

The National Telecommunications Commission (NTC) ordered the media giant to stop its operations on May 5, after the TV network’s legislative franchise expired on May 4. Since then, some of the TV network’s biggest stars have been rallying online to appeal for the network’s franchise renewal in Congress.

The short song talks about how the TV network has been a part of people’s lives and how many people still have faith that it will eventually return.

(It saddened us/ when our wish was left unanswered / did not know what to do / what should be said. / Even though it is forced / even though we are angry and even though it extremely hurts / the family that came from red, green and blue cannot be vanquished.)

Like Pressman, actor Dingdong Dantes and TV host Kim Atienza have taken on the challenge of learning how to play the guitar during the COVID-19 pandemic.

Pressman also defended her “Ang Probinsyano” co-star Coco Martin for his vocal opposition to ABS-CBN’s shutdown earlier this month. Martin participated in an online protest “Laban Kapamilya,” giving his two cents on the matter. Afterward, the actor faced harsh criticism for his statement and the manner in which he delivered it.

Pressman joined her fellow celebrities including Angel Locsin and Korina Sanchez who had earlier stood by Martin. /ra