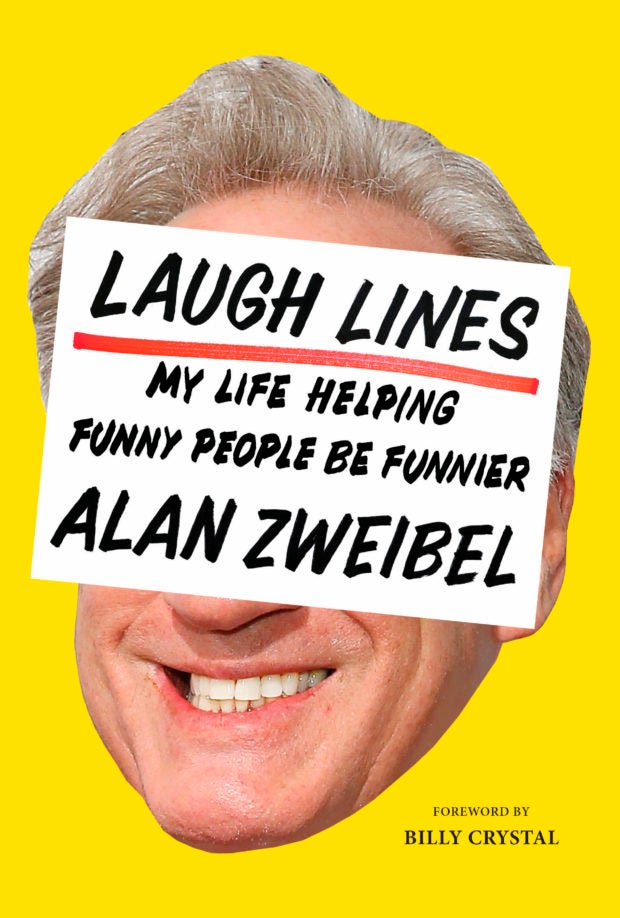 LOS ANGELES—You may not know it, but if you treasure the early years of “Saturday Night Live” or are a fan of “It’s Garry Shandling’s Show” or “Curb Your Enthusiasm,” Alan Zweibel makes you laugh.

In nearly 50 years and counting as a writer, Zweibel helped shape the tone of “SNL” and crafted TV and stage projects with Billy Crystal, Gilda Radner and Larry David. He belatedly overcame the nerves that stymied a stand-up career, but Zweibel’s behind-the-camera success crowds out regret.

He details the high points and some painfully low ones in “Laugh Lines: My Life Helping Funny People Be Funnier” (Abrams Press). The foreword by Crystal praises the Emmy-winning Zweibel for approaching everything he writes “with the same fervor and dedication to making it funny.” And, since Crystal is no slouch at punch lines, he offers a complete list including Zweibel’s “small-claims-court pleas.”

The pair worked together on Crystal’s one-man 2004 to 2005 Broadway play “700 Sundays” and the upcoming movie “Here Today,” adapted from a short story by Zweibel. Crystal directed and stars with Tiffany Haddish.

The memoir recounts Zweibel’s career path and those he met along with it, starting with the comic who agreed to pay him $7 (over P350) for a joke if it landed with a Catskill Mountains resort audience in New York (it did). In an interview with The Associated Press, edited for clarity and brevity, the affable Zweibel, 69, discussed the joys of creative partnerships and his deep affection for Radner, the “SNL” star who died of cancer in 1989 at age 42.

AP: Why did you decide to write “Laugh Lines”?

Zweibel: I was urged to do so by people who had seen me speak at colleges and fundraisers and heard material I use on late-night TV. And the reason I wrote it was I thought I might be one of the few people out there, if the only one, whose career spans the Catskills through “Curb Your Enthusiasm” to what I’m doing now. I’m a firm believer that we should leave a paper trail and pay homage to who came before us, to show what begat what.

AP: The book is warmly reflective and doesn’t engage in score-settling, although you are direct about what it was like to work with Ryan O’Neal and Farrah Fawcett on a failed sitcom and the friction you had with Shandling and, at times, with Radner.

Zweibel: What would the point be to either settle a score, as you say, or to speak negatively? This is about the experience of writing for people. So much of it has been exhilarating and rewarding, some of it has been trying. I want to be somewhat instructive in a way. I would love students of comedy to pick this (book) up and see what it’s like to collaborate, see what it takes to do this. And yeah, there are ups and downs. Me and Gilda was easy, me and Gary was easy. It came with stuff because you’re married in a way, you’re married through your work.

AP: You wrote the book and play “Bunny Bunny” about your relationship with Radner.

Zweibel: ‘Bunny’ is life-affirming even though she passes away because the relationship still exists, still endures. It’s a platonic love affair, so there’s a purity about the friendship. She was Aunt Gilda to my children. My wife, Robin, and she became best friends, especially toward the end of Gilda’s life.

AP: Of those you worked with, was Radner most important to you?

Zweibel: She was the first collaborator that I had that for a sustained period of time and at such a formative time. Garry Shandling has his own special place, so does Billy Crystal. I started out with Billy when we were both at the (comedy) clubs in 1973 or ’74. He used to pick me up at my mom and dad’s house on Long Island and we’d go and tell jokes at the clubs and listen to the cassettes on the way back. And we’d give each other notes. Then so many years later, he asked me to collaborate with him on “700 Sundays.” This was such a high point for me because he trusted me with his family. CL /ra